In his address to the participants prior to the flag off ceremony, the Governor expressed his hope that the event will further help in cementing the age-old relationship and friendship between India and Bhutan. He also wished that it provides a platform for exposure of traditional and cultural association and tourism potential of Arunachal Pradesh and Royal Kingdom of Bhutan.

Stating that Arunachal Pradesh shares 160 km of international border with Bhutan, the Governor pointed that the rally will enhance people-to-people contacts between India and Bhutan. It will also showcase the potential for adventure and motor sports in Arunachal Pradesh.

The Governor called upon the participants from both the countries to carry the message of Prime Minister of India,  Narendra Modi that India and Bhutan are one and will stand as one to face any adversity. He also urged upon them to carry forward the goodwill message for each other’s country.

The Governor commended the rally drivers for their enthusiastic participation and adventurous spirit. 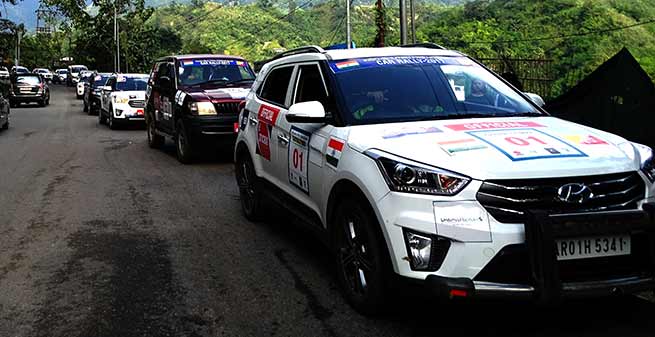 The route followed will be Itanagar – Basar – Mechuka, which will be coinciding with Adventure@Mechuka festival – Basar – Itanagar – Guwahati – Phuentsoling and culminated at Thimpu on 28th November 2017. A total of seventeen cars are in the rally.

The 1st Edition was flagged off by Chief Minister  Pema Khandu on 23rdOctober 2016 from Tawang and the route followed and places covered were Tawang- Bomdila- Itanagar-Guwahati-Phuentsoling and culminated at Thimpu on 26th October 2016.