Chief Minister Pema Khandu flagged off the all-women Mt Gorichen Expedition from his office premises in a simple function here on Thursday.

This will be the first all women team attempting to summit the second highest peak of Arunachal Pradesh, which is considered as a technical peak and only seasoned climbers can make it to the top (6488 mtr). Anshu Jansempa, who climbed Mt Everest twice, will lead the team of 10 members from states like Jammu and Kashmir (Ladakh), Uttaranchal, Himachal, Sikkim and Arunachal Pradesh with four support staff. 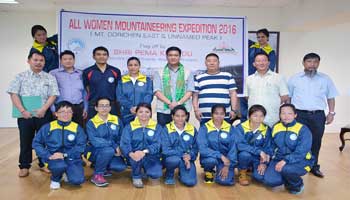 Appreciating the women expedition team for taking up the challenge, Khandu prayed for their safety and successful summit.

“On behalf of the state government and as the local legislator of the area, I assure all cooperation and support to the expedition,” he assured.

Khandu said that he will contact the local administration of the area and direct them to offer all possible help to the team during the expedition.

Interacting with the team members, the Chief Minister said their expedition will open up more such ventures in other areas of the state too besides promote adventure tourism.

“With team leader Anshu and member Tene Mena, an Everester herself, I am sure your expedition will be a successful one. On behalf of the people of the state, I wish you all the best,” Khandu said.

Giving a brief about the expedition being jointly sponsored by state department of Sports and Youth Affairs and Indian Mountaineering Foundation (IMF), Anshu informed that the main objective of the all-women expedition is to promote women empowerment besides, of course, promote adventure tourism in the state.

“From here (Itanagar) we are heading straight to Bomdila, then Jang and start our trek to the base camp. We expect to make the summit by last week of October,” informed Anshu, who was part of the 12-member team that successfully summited Mt Gorichen three years ago.

Anshu and her team, meanwhile, wished luck and success to the team of ITBP and IMF which is on its way to summit the state’s highest and most difficult peak Mt Kangto (7042 mtrs).

Incidentally, the Chief Minister had flagged off the Mt Kangto expedition on September 25 last.