LONGDING-  Joining the Oriah festival at Longding in the Wancho heartland today, Chief Minister Pema Khandu lauded the rich, colorful and vibrant culture that exuberates during one of the most joyous festivals of Arunachal Pradesh.

With the thunderous beatings of log-drums and piercing war cries, Khandu praised the Wanchos for preserving their indigenous culture in its true form since generations.

“Yes we need development and modern way of life, but in the race for development, we should not loss our culture proudly followed and practiced by our forefathers,” he said at the festival ground here.

Citing the presence of Indian Army and Central Armed Paramilitary Forces in the district, Khandu suggested that they along with the district administration should join together to celebrate local festivals, which he said will add to the festival’s color and create bonhomie between the people and the forces.

“Next Oriah I hope to see people thronging army and CAPF stalls,” he said.

He also lauded the Wanchos for displaying supreme patriotism by serving in the armed forces in large numbers.

Paying rich tributes to Rifleman Longdon Wangsu of 16 Assam Rifles, who was martyred in Imphal recently, Khandu announced that permanent Group C jobs would be given to next of kin of all indigenous martyrs henceforth. 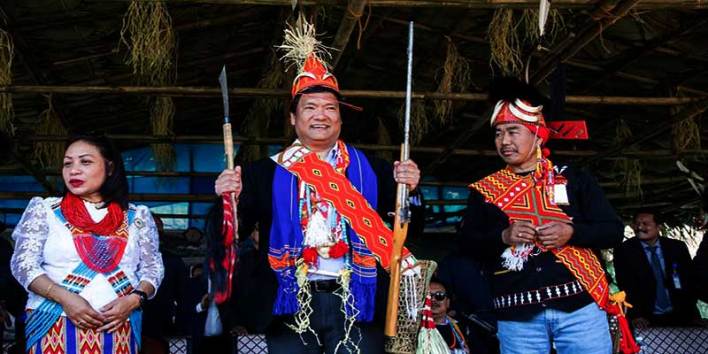 He reinforced ‘unity in diversity’ as the foundation of the state’s peace and development and said despite cultural and linguistic differences the indigenous tribes have existed peacefully in close proximity.

Khandu said this unity has driven the concept of ‘Team Arunachal’ and expressed gratitude to all past leaders for taking the state on the right path of peace and development.

“Each and every community ought to work as one Team Arunachal. Once we work as a team, with the rich potential of resources bestowed on us by nature, we will soon become self-reliant and prosperous,” he said.

Reminiscing one of his visits to Longding in 2012 as Minister of Tourism and RWD, Khandu expressed satisfaction that the Kanubari-Longding highway has come up good easing travel for commuters. He informed that the other important road connecting Longding with Khonsa is also coming up fast.

“This morning I spoke to the contractor of the Longding-Khonsa road, who informed that 30% work on the road is complete and assured that the rest will be completed as per schedule,” Khandu said.

He asserted that once the connectivity issue in the state is sorted out, Arunachal Pradesh will witness accelerated growth never seen before.

Referring to the forthcoming budget session, the Chief Minister assured ‘Budget 22-23’ will be a game changer.

“There is no dearth of funds by the blessings of the central leadership. Our focus is on empowering the youths, who are the future of our state. This budget will be different and inclusive,” he claimed.

Khandu, meanwhile expressed regret that one of the most important projects in the district – water supply system to Longding township – still remained incomplete.

“I seek apology from the people of Longding for the delay. In fact I had expected to inaugurate the project but got dejected when I couldn’t find it on the list of projects to be inaugurated today.

I promise today that immediately after my return to the state capital, I will hold an urgent meeting with all the authorities concerned including the PHE Minister and chalk out a clear-cut road map to complete it soon. I also promise to return to inaugurate it,” Khandu announced.