ORIAH : The festival of Wanchos ( By Adv Langto Wangpan )- The hardworking and peace loving Wanchos inhibits the Longding District of Arunachal Pradesh. They live in their own independent way by emulating their own ethos, traditional heritage, cultural identity and ethical treasures of immense values. The Jhum cultivation or shifting cultivation is the main stay of the people apart from other economic activities. Chieftaincy  with the Wangham as the head still prevail in every wancho village.

The village  council is called Ngo-Wang. It is empowered with all political and judicial responsibilities within the village and the wancho society. Wanchos believe in the existence of Almighty, omnipotent, omnipresent and omniscient God whom they call Jowaan Zang. Jowaan Zang means the god in the sky. Jowaan is not the name of god, jowaan means simply ‘GOD’. The people live their life following and keeping the sanctity of the Waanlam i.e. the code of living as given by God. The people are believers of Jowaan and followers of the Waanlam, which we can call as indigenious faith or way of worship.

It is believed that one group of the wanchos migrated through Tangnu and the other through the Sangnu. In those days there use to be inter village feuds for various reasons. Some anthropologists term it as Head hunting which need to be relooked. In fact the inter village feuds  was an offensive policy of those people in order to expand their territory, gain supremacy over the neighbouring villages as well as to defend and protect themselves.

Wanchos celebrate a number of fairs and festivals such as Oriah, Lauden, Sahchawan, Pungzm, etc. All these festivals differ in the time of celebration, type of rituals performed and place or location of the celebration. But people being agrarian most of these festivals are related to the agricultural processes and mother nature. Rituals are the integral part of every celebration. Celebration cannot be without performing a ritual. The Almighty God “Jowan Zang” is invoked by uttering its name while offering rice-beer. The act of performing this ritual is called Ju-O.

Oriah is the most prominently and enthusiastically celebrated annual festival throughout the Wancho area, though other festivals are not at all less important or less cherished. Usually Oriah is celebrated at the beginning of the Spring season.  It last for the whole season in the wancho area because it is celebrated on different –different dates in different-different villages as per the decision of the respective village Ngo-Wang. The date is announced by the respective village Ngo-Wang according to the lunar calendar they maintain. Generally it is celebrated in the first half of the lunar month.

In the process of practicing jhum cultivation, the village select a particular area of their jhum field by performing a ritual called “Ozok-Nantak” during the Lauden festival which is generally celebrated in the month of August-September ( wancho Month NGAN). The people cut the forest, burn it and clear the jhum plot by the month of January- February ( Wancho Mont TCHANG). When the plot is ready millet is sown ceremonially. A small hut which is called TAAP is built in the field. During all these work the people have no time to rest. After toiling hard for completion of these works they get time for leisure and merry making. This period is meant for the Oriah. The deep meaning of Oriah is Prayer and celebration. ‘O’ stands for the sacred offering to the Jowaan for bumper crop and prosperity and ‘Riah’ stands for the leisure and celebration. So ORIAH means prayer and celebration.

The most important feature of the Oriah festival is the procurement and installation of a sacred bamboo called Zangwaan with 7(seven) branches. These seven branches stands for the seven main crops of the Wanchos, they are : 1. Hikha ( Millet )     2. Tchah (Padd)y      3. To (colocasia)      4. Zaampa / Sowang (Maize)   5.  Pankhan (Tapioca)   6. Ophom(a kind of leafy vegetable) , Nam (till), and tula,(yeast millet) 7. Nyepho-phiasa (Pulses).

The Zangwaan is the central figure of the Oriah festival. In the village the zangwaan is procured, decorated and installed at the sacred platform called the Zangwaantong near the village Sacred grove called Sautong which generally is in front of the Village Chief. This duty is performed by the traditionally appointed and assigned youths of the PAANU and PAASA.

The Zangwaan is the symbol of the Oriah festival. It is also the symbol of Wancho Culture and Wancho Wanlam. We offer our prayer for rich harvest in the agricultural fields, good health and prosperity of the people and well being of the people. Wanchos worship nature since time immemorial. Homni genesis like land, water, forest, animal species are equally considered in our culture. Destruction of nature is considered as destruction of human life itself. Protection of environment and maintaining ecological balance was a prime concern of the people. So the Zangwaan is installed after purification as a symbol of nature. Only a specified variety bamboo species called ZO is used in the construction of the Zangwantong. Zo is the species which is of multiutility unlike other bamboo varieties.

At the arrival of the Spring season every Wancho prepare and waits for the Oriah. Men folk sing “ Zangwaan ngoihai…ku ae ponglang-laahuak le taan tai aa…” which means that “O Zangwaan, I am waiting for your arrival with sacrificed cattle and pigs.” When the Zangwaan is procured and decorated it is purified by offering rice beer (Ju-O). We chant “Zangwaannu..poshey lohley ngoi hai o..” which means Zangwaannu come with  abundant flowers and fruits).  With the passage of time we have done away the practices of sacrificing live animals to purify the sacred Zangwaan since many years. We perform the Ju-O where the purest form of rice beer is offered. We chant “Zangwaannu…hanpo hanjiak saaitoh pha o.”  Which means “ O Zangwannu, sow your flowers and fruits in the form of rich harvest and prosperity.”

Once the date is announced the preparation for the Oriah starts in full swing. On an appointed day the Zangwaan is installed and the Oriah starts with the sacrifice of cattle and pigs for feast. The women folk prepare sticky rice (Zaam) and sticky millet (Hinai) in the bamboo tube for offering to the Zangwaan and also for consumption. It is called (Sahphat). The Bonu Nyih and Bosa Nyih are the main days for the performance of dance at the Zangwaantong. It is a time of great rejoice among the people. Relatives and friends  exchange  meat  drinks and gifts. Feasting  singing and dancing have no limit.

In due course of time the Wancho people residing at various administrative HQs within the Longding District started celebtating Oriah at their respective HQs. Today Oriah is being celebrated at all the places wherever Wanchos are residing. Celebrating Oriah at different places aims at the harmonious co-existence of the Wancho people leaving aside the memories of the past feuds and differences. It is also an attempt for the promotion of our rich tradition and showcasing the colourful traditions which we inherited from the forefathers. Celebrating the Oriah as one entity by the people of different villages at one place speaks volume on the unity and harmony among them.

Today in the name of modernisation and due to misinterpretation of our traditional practices a handful of people are inciting to bring changes in the celebration of the Oriah and other festivals which will degrade and demean the essence of Oriah. We cannot sacrifice our Wancho culture and traditions at the altar of development, education, modernization and Politics.

Culture is a dynamic and vibrant entity of any community. We have to march ahead in tune with the need of the time. This would certainly require some changes. But if we change the systems and do not continue our traditions we will be people without identity. If we don’t change then we won’t be able to catch up with the rest of the world. Therefore we have to accept and assimilate certain useful ideas from others and still be Wancho in all essentials.

It is high time that the Wancho Youths come forward to take up the responsibility to sustain the Oriah in its pristine form and promote Wancho culture.

(The writer is the PRESIDNET OF Oriah celebration committee 2022 Longding) 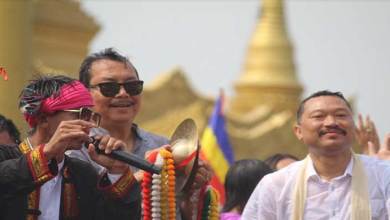