Locals struggled to commute to their workplace as damaged roads led to traffic snarls. Not only that, the heavy downpour led to overflowing drains in several parts.

Heavy rain and landslides in various places of Itanagar and Naharlagun town created chaos in the area, compelling all govt and private schools to shut down for next three days from Thursday.

Locals struggled to commute to their workplace as damaged roads led to traffic snarls. Not only that, the heavy downpour led to overflowing drains in several parts.

“Each year we face the same issue. This year also we are not able to attend the school as everywhere is landslides or water logging” said a student of a Govt school in  Itanagar.

Additional Deputy Commissioner, Talom Dupak incharge of Deputy Commissioner, Capital Complex informed Arunachal24 that he has given verbal instructions to all government and private schools of capital complex to be remain closed till 13th July for the safety of students and  teachers. 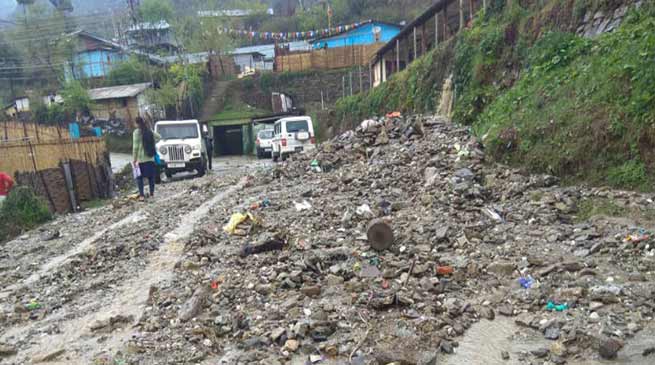 He said that so far no major havoc is reported in the Capital complex apart from roads blockage due to landslide and water level rising in the rivers.  However, all the necessary repairing and maintenance work will be immediate taken up, he informed.

He further advised the denizens to avoid travelling at night during rainy days and asked them to drive slow to avoid any untoward accident.

Reassuring that the disaster management teams are fully prepared to assist people at any type of emergency or disaster.

He also said that the administration will issue guidelines to the agencies for repairing and maintenance of bridges and roads wherever it is needed. The district administration has planned for few relief camps he informed.

It is to mention that since last one week there have been several dwelling houses have been completely damaged or partially damages due to landslide and flash flood.