Biggest mass promotion in the history of Arunachal Pradesh- 1535 constables of APP promoted to the post of Head Constable rank.

An Alankaran Samaroh organised by the state police department to celebrate the promotion and to extend deepest gratitude and thanks to the Chief Minister for the unprecedented move and bold decision was held today.

Speaking on the occasion, Chief Minister said the Police personnel in the rank of Constable of Civil Police/AAPBn/IRBn under Arunachal Pradesh Police have been facing stagnation without promotion.

“Police personnel recruited in the rank had to retire in the same rank even after putting in more than 20 to 30 years of continuous service. This situation had adversely affected the work force in the department demoralising in the career progression of the police force,” said Khandu. 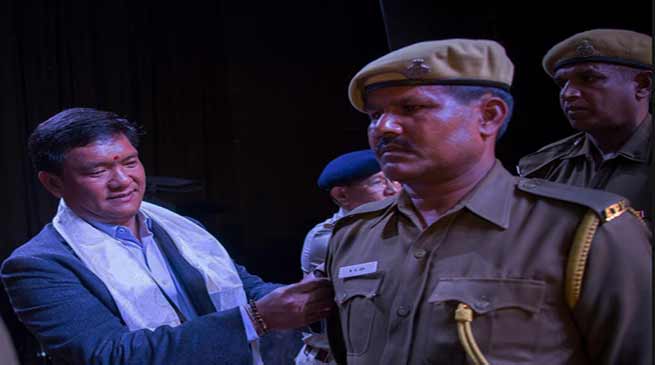 Chief Minister said sensing the necessity and to boost the morale of the Police force, the State Government had passed a resolution in the Assembly to promote constables who have completed 20 years of service and more to Head Constable on Honorary rank.

“I believe, this step of the Government will prove to be a watershed moment in the history of Arunachal Pradesh as it will radically motivate creating job satisfaction at the cutting edge,” said Khandu.