While the world was celebrating Valentine’s Day, Singphos of Eastern Arunachal Celebrating their Annual Festival Shapawng Yawng Manau Poi.  They  were dancing to the beats of Ching/thong, the drum, and Bao, the gong. The spirit of hundreds of colourfully attired Singphos gathered at the Manau Wang (festival ground) performing the ritual Manau (dance) got a boost with the joining of Chief Minister Pema Khandu and Deputy Chief Minister Chowna Mein and State BJP President Tapir Gao– all of three donning Singpho traditional attires. Bordumsa, a non-descript town in Changlang district bordering Assam, was hosting the famous dance festival of the Singphos – Shapawng Yawng Manau Poi.

Wishing the people on the 33rd edition of the traditional festival, Khandu marvelled at the grandeur of the Singpho heritage and culture. 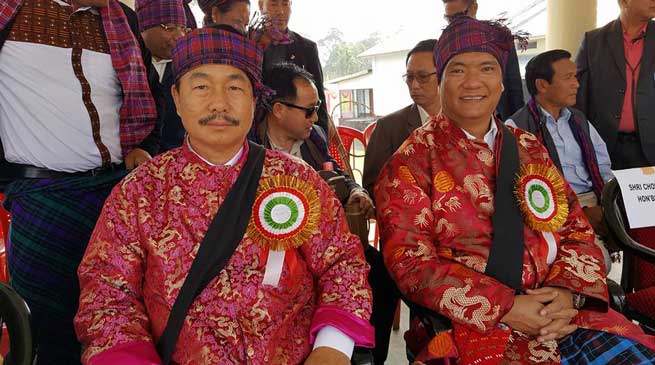 “I am visiting Bordumsa for the first time in my life and what an opportunity to visit. I feel proud to be an Arunachalee witnessing the colourful way of life and tradition of the Singphos. I congratulate you all for keeping your distinct heritage alive,” he said.

Khandu pointed Arunachal is a diverse state with so many tribes inhabiting the land.

“While nature has bestowed us with scenic bounty, our tribes have added colour and grandeur to the landscape. We are actually rich!” he said.

Bordumsa is known for its multi-ethnic culture with about eleven communities residing side by side.

Khandu hailed the people of Bordumsa who despite being from different culture and ethnic backgrounds have maintained peace and harmony since ages.

“You are all example for the rest of our state. You are the living example of peace, harmony and bonhomie. Through you, I call upon all communities of the state to follow suit for without peace development cannot come,” Khandu appealed.

Speaking about his government’s developmental agenda, he assured that ‘times have changed’ and ‘the old way of working will not be tolerated’.

“Our top most priority is to take along each and every community, region, district and individual on the path of development irrespective of party or religious affiliations,” Khandu said while citing the fruitful meeting with Community Based Organizations a day earlier at Itanagar.

Responding to a memorandum submitted on the occasion, the Chief Minister assured that all genuine demands will be looked into sympathetically and fulfilled phase wise.

To the demand for inclusion of Shapawng Yawng Manau Poi as a tourism festival, Khandu requested Chowna Mein, who hails from the area, to make a proposal in this regard after consultations with community leaders and seniors. He also informed that the state government is contemplating to offer funds through the department of Art and Culture for celebration of all the major festivals of the state’s indigenous communities. 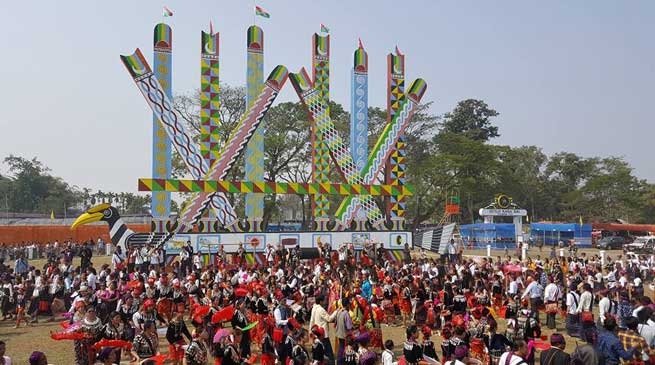 Deputy Chief Minister Chowna Mein highlighted the history of the Tai Khamptis and the Singphos and said, “Ours must be the only community in the state that has a written history and we must be proud of it.”

Hailing the Singphos for their steadfastness and tolerance, Mein assured holistic development of the community and its region.

“Holistic development of each community and region is a promise of the Pema Khandu-led Government,” he asserted.

State BJP President Tapir Gao, who too joined the festival, took a dig at rival political parties for painting BJP as a communal party. He said BJP is the only party which keeps the nation and its people before the party and its leaders.

Earlier, the Chief Minister released a Singpho-Assamese-English dictionary and its mobile app besides inaugurating the exhibition stalls put up at the Singpho Cultural Heritage Center. He also released a souvenir to commemorate the 33rd celebration of Shapawng Yawng Manau Poi. 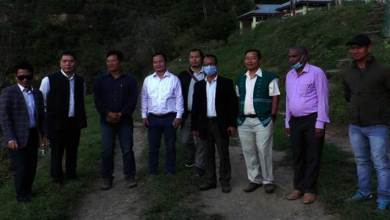