BOLENG- (By Gandhi Darang )   The villagers of Kebang in Siang District had urged the district administration to reconsider the name of Yembung to ‘Kebang’ in all the official correspondence.

In a joint letter written to DC Siang on Tuesday, the panchayat leaders and GBs of Kebang apprised that the name Kebang  has been inappropriately and wrongly written as ‘Yembung’ in all official records and also inscribed on all sign-boards of governmental establishments which are located under Kebang village. 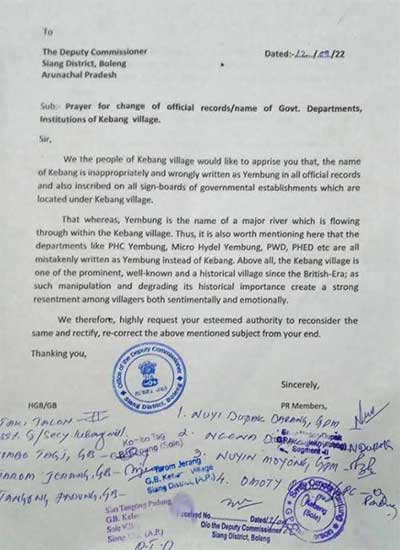 ‘Yembung is the name of a major river which is flowing through within the Kebang village. Thus, it is also worth mentioning here that the departments like PHC Yembung, Micro Hydel Yembung, PWD, PHED etc are all mistakenly written as Yembung instead of writing Kebang’, read the letter.

They further informed that Kebang village is one of the prominent, well-known and a historical villages since the British-Era; as such manipulation and degrading its historical importance create a strong resentment among villagers both sentimentally and emotionally.

The villagers also decided to erect sighn boards in all the important locations of Kebang on September 17th next.