The effects of Indian Super League have started percolating down to the remotest of areas of Assam, as evident from the enthusiasm shown by the people of Chirang towards the recently conducted Chirang Football Championship 2016 by the Indian Army. 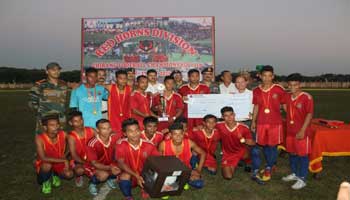 Standing tall to the Army’s long standing tradition of fostering the spirit of sportsmanship and camaraderie amongst youth, Red Horns Division conducted Chirang Football Championship 2016. The championship was conducted from 20 Sept to 15 Oct 16, which witnessed enthusiastic participation of 56 teams from Chirang District . The gala event culminated with the final match played between the two best teams, Thariabari Football Club and Jalaru Football Club. In a keenly contested match at the District Sports Complex at Kajalgaon on 17 Oct 16, Jalaru Football Club emerged the winners. The occasion was witnessed by a huge gathering of around 1000 sports enthusiasts from all corners of the District in presence of military and civil dignitaries which included.

The importance of making sports a way of life, not only to lead a healthy life , but to pursue it as a career  was well brought out by this noble endeavor of Army. The local populace appreciated the Army’s initiative and deposed confidence in the administration for bringing near normalcy in the area.