The Governor, while reviewing the Arunachal Pradesh Public Service Commission issue with the Chief Minister, reiterated that the Public Service Commission is a vital institution and it must be the endeavour of the State Government to instill the sense of transparency and fair-play amongst the aspiring youth for the State Civil, Police and other Services competitive examinations.

He said that putting the affairs of the Public Service Commission is critically important, immediate and essential. Its rules and procedures for conducting examinations must be impeccable with no scope for errors and need no litigations, he said.

The Governor expressed happiness that the Donyi Polo Airport, which connects the State Capital Itanagar, will be inaugurated by Hon’ble Prime Minister Narendra Modi. He said that the Airport will be extremely beneficial in all respects particularly during the monsoon season and medical emergencies.

The Governor said that the Central Government under the leadership of Prime Minister Shri Narendra Modi is giving high priority for developing our Border areas. He stressed that the villages in the Border areas must be economically self-sufficient and should have good roads, schools, medical facilities and reliable communication networks. He underscored the timely implementation and quality assurance of the public projects in the Border areas.

Also Read- ZIRO, where nature and traditions are still alive

The Governor said that as the working season in the State has begun, the concerned departments of road communication and other construction projects must put in concerted effort to achieve the work target within the prescribed time frame. He advised the Chief Minister to direct the senior officers to minutely monitor the Border development projects so that there is a sense of accountability and responsibility amongst the officials. 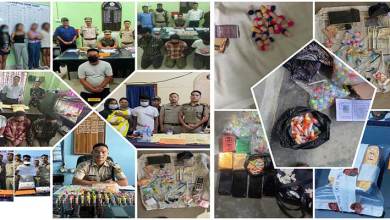