Part of NH-415 collapses after heavy rain- Incessant rain leaves trail of destruction in state capital–    Amidst lockdown in the capital region in the wake of spike in covid cases, incessant rain in the last few days has left a trail of unprecedented devastation and destruction in the state capital Itanagar thereby compounding the miseries and predicaments of the people. In the intervening night of 30th and 31st May 2021, torrential rains created havoc in the capital. The blockade of drains triggered flash floods in and around popular shopping complex Akash Deep in Itanagar due to which some shops were inundated and muds spread all over the place. However, there was no report of any loss of life. The district administration and concerned departments have swung into action and both men and machines have been pressed into service to clear the drainage blockade. The departments are working on a war-footing and hopefully the drains will be cleared by this evening.

A large portion of the capital highway has also been washed away at D-Sector, Itanagar near IG Park entry gate when the retaining wall caved in,  triggered by incessant rain. The magnitude of devadtation is so huge that it may well take weeks or even months to restore the retaining wall which has been raged and crushed down into the nullah below. It may be mentioned here that the highway was constructed recently. 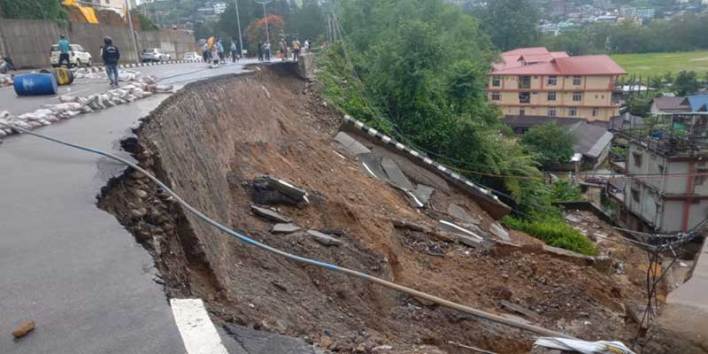 The whole capital region with loose sandy soil, haphazard construction of private houses, shops, roads and rampant and wanton cutting of earth by flattening hills and mountains with the help of mean machine JCB, is vulnerable to flash floods and landslides. This is only the beginning of rainy season. The actual monsoon is yet to set in. We are in for more devastation if we don’t take the necessary precautions. The state government under the young chief minister Pema Khandu has completed the 1st phase of the highway from Chimpu to Papu Nullah. Now, the onus of maintaining the highway is not only on the government and the concerned departments but on all the netizens. Unplanned onstruction of houses and shops over drains, streams and in the vicinity of the highway thereby reducing the road space should stop.

Construction of infrastructure is important but what is more important is how we use it. We must be responsible citizens and must be keen not only to use the infrastructure like roads and buildings properly but also safeguard them jealoudly. Blaming or pointing our accusing fingers at the government all the time serves no purpose whatsoever. States like Meghalaya, Mizoram and Sikkim are also landlocked and their roads are narrow like ours. But thanks to the self discipline and inherent good nature of the people, the roads are maintained beautifully. Their traffic management is wonderful and worth-emulating. The government is only as good as the people. Without the willing support and cooperation of the people the government alone can do precious little.

We expect more rains in June-August. So, let us be prepared by taking all the required precautions. It is needless to say that most of the calaminities and catastrophes are man made. Interferring too much with Mother Nature has often caused human beings dearly. Having said and done the PWD, Highway and M/S TK Engineering Consortium must not compromise with the quality of work, especially while building roads. Funds are hard to come by. Money should be utilized judiciously by bulding good quality roads and bridges. Capital is the index of the whole state. Outsiders visiting our capital should be impressed and willing to return again and again.