ITANAGAR-  Expressing concern over the landslide that claimed at least two lives here at Yagumso Colony,  Mayor- Itanagar Municipal Corporation (IMC mayor ) Tame Phassang rushed to the spot and also visited the survivors of the landslide tragedy at RK Mission Hospital as well as extended financial assistant as immediate relief.

The tragic landslide that occurred on Sunday night had claimed two lives, and one is still missing. The team of NDRF, SDRF, and Police are on job to retrieve the missing person.

Mayor visited the survivors at RK Mission Hospital today and took stock of the situation regarding their health. “We cannot evade the fortune, but being the responsible person I have come here to see their health condition. It is very sad to know that, the family has lost two members and one is still missing from the unfortunate incident. In my capacity I have provided assistance as immediate help, however, I appealed to the concerned authority to assess the damages as soon as possible and confer immediate relief. 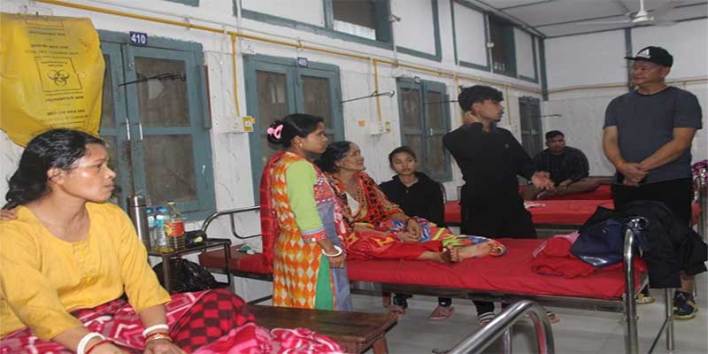 While appealing to the public to come forward to help the needy person in such situation, Phassang, further urged the denizens to avoid any kind of earth cutting specially during monsoon, and also appealed not to stay in a landslide or flood-prone areas. He also asserted that an Excavator from IMC has been also pressed in the Search and Rescue operation.

Earlier, he also visited various locations of landslide-affected areas under the capital region including Gompa and adjoining areas where local residents have lost their properties in the natural calamities due to landslides triggered by incessant rain.

Meanwhile, Mayor also expressed his heartfelt condolences on the loss of two lives in another landslide that occurred at Jullang, in the afternoon of Monday.