All Arunachal Pradesh Students Union (AAPSU) today condemn the Police firing on the NESO members in Tripura during the protest against  the Citizenship (Amendment) Bill-2016  on  January 8.

Addressing the reporters, AAPSU General Secretary Tobom Dai said that it was an unfortunate incident , when police opens fire on students who were protesting against the Citizenship (Amendment) Bill during NESO sponsored Northeast bandh .

it is also condemnable that the NESO leaders were objected when they went to meet them in Hospital in Tripura. Five students were injured in the incident. 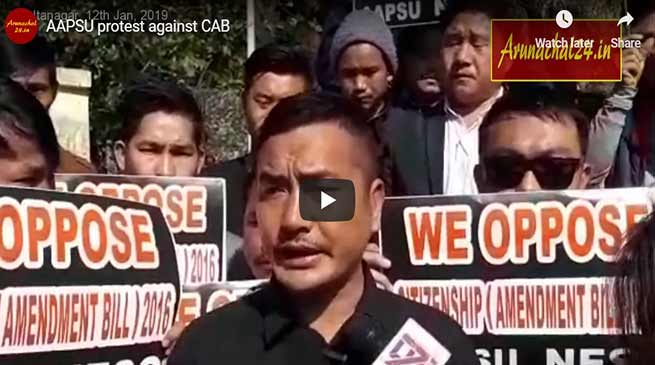 Dai said that the ruling BJP at centre have been trying to bulldoze a bill that is detrimental the indigenous people of entire North Eastern states. We are protesting the sad incident and in solidarity with the Tripura Students Federation (TSF) we have unfurl  black flag  alogwith other apex students organisation of the region.

He thanks all leaders, political party who objected the CAB in parliament and outside the parliament which include Nitish Kumar, Chandra Babu Naidu, Conrad  Sangma and leaders from Shiv Sena and AGP at the same time he demanded an enquiry into the firing incident of Tripura in January 8 wherein the NESO activist were injured.