Chief Minister Pema Khandu today called on all the heads of the schools gathered here to make education in government schools attractive to students by improving its quality.

Addressing the first state level head of schools conference organized by the directorate of secondary education, Chief Minister said despite top priority being given to improve school education in the state, people are reluctant to send their children to government schools.

Chief Minister said a difference will be visible only when there involves change in mindset. He emphasized on discipline and motivation and underlined the importance of regular orientation and training programme for the teachers.

To boost morale among the teachers, Chief Minister said all illegal promotions will be discouraged and urged that the DPC be conducted regularly to provide promotion on genuine basis. He further asked the teachers to provide genuine feedback on success of various flagships programme on education being implemented on the ground. 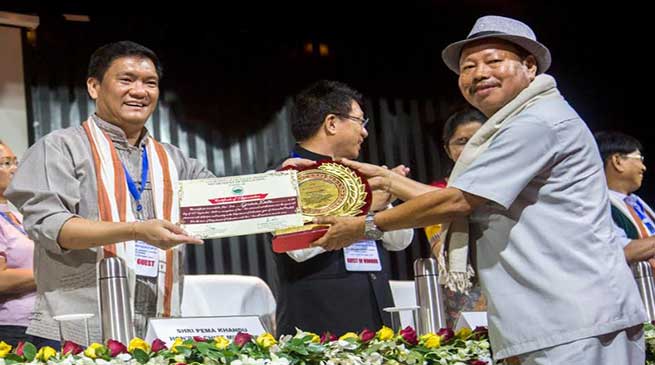 On infrastructure, Chief Minister said all infrastructure gap will be filled up phased manner across the state. He informed that the state government also plans to use prefabricated school buildings to address the infrastructure gap given the geographical and climatic challenges involved. He said such prefabricated buildings will be first used in Government Higher Secondary School, Itanagar on pilot basis and upon its success will be implemented elsewhere. He also informed that state government plans to develop the school as ‘model school’ by giving facelift to its infrastructure.

Chief Minister said to improve education, transparency measures are also being taken with budgeting exercises conducted with full consultation with the public. He also said districts are being empowered financially and decision making delegated to decide on their own needs of their educational needs.