The second Thansen Wangchadong Memorial Football Tournament sponsored by Lowangdong family of Borduria village in memory of the Rani of Borduria late Thansen Wangchadong and organized by the district sports association of Tirap district in collaboration with the organising committee kick-started at Nehru stadium, Khonsa on 10th September amid a huge gathering of football aficionados. 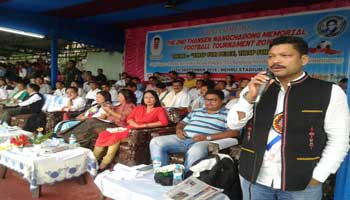 While speaking as the chief guest on the occasion 53-Changlang North MLA Tesam Pongte while appreciating the sponsors and the organizing committee members said that conducting the mega TWMFT in memory of the Rani of Borduria was in itself a befitting tribute to the mothers who sacrifice their lives for the well-being of their children.

While underscoring the importance of games and sports Pongtey lamented that the youth of TCL were not taking sports as seriously as they should thereby depriving themselves of many job opportunities. He passionately exhorted the youth to accord due importance to sports and asked them to shun opium, drugs and alcohol which were detrimental to healthy growth. The chief guest was later introduced to the players and he formally declared the tournament open.

In his speech the main force and inspiration behind the sporting event who is also the sponsor Wanglin Lowangdong thanked the committee members, district administration, Police and officials and urged the players to play the beautiful game in the true spirit of sportmanship.

While throwing light on the main objectives of organizing the tournament Lowangdong said that it was to encourage and enthuse the youth of Tirap district to take up games and sports seriously adding that apart from providing job avenues sports fostered love and brotherhood among the people.

Prominent public leader T. Tongluk while giving a brief history of late Thansen Wangchadong said that the Rani of Borduria was endowed with all the queenly attributes who effectively managed the administration during the erstwhile NEFA days. Earlier, in his welcome speech DIPRO Denhang Bosai said that youth all over the world had taken up sporst as a career and urged the youth to make a gainful career out of sports.

Later, local MLA Wanglam Sawin administered the oath to all the captains of the participating teams. Altogether 24 teams from all over Tirap district are participating in the tournament. The winning team will be richer by Rs 100,000. Also, there are other individual prizes. ZPC, HoDs, PRI leaders and hundreds of football lovers witnessed the inaugural match played between Thinngdong FC and Ollo FC. The Dibrugarh based The Eastern Today is the media partner of the tournament.