ITANAGAR-  Two more labourers who went missing from India-China Border in Arunachal Pradesh, where they were engaged for road construction, rescued from Kurung Kumey district on Sunday, a officials said. The missing labourers were among the 19 who went missing 20 days ago.

Bengia Nighee, Deputy Commissioner of Kurung Kumey district, said that the two rescued workers — Kholebuddin Shaikh, 27, and 19-year-old Shamidul Shaikh — are critically ill and they are being provided medical treatment at the government hospital in Naharlagun, near Itanagar. 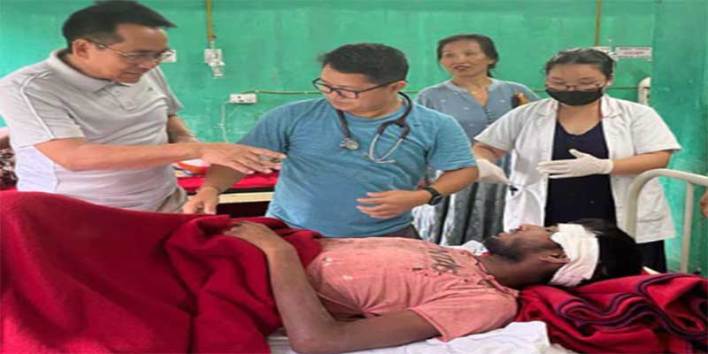 The State Disaster Response Force (SDRF) including local guide stopped the missing operation in the late evening due to the threat of poisonous snakes.

The search operations would resume on Monday for the remaining 9 missing workers.

The two rescued workers, rescued by the SDRF, said that they left four labourers behind them who were very critical and could not walk in the dense forest and mountainous terrain, the Deputy Commissioner said.

He said that the Indian Air Force (IAF) chopper not engage in the operation on Sunday due to bad weather.

The Deputy Commissioner, who is supervising the rescue operations himself, said after fleeing their project site camp at Huri on July 5 night, the 19 workers had entered a dense forest infested with poisonous snakes and wild animals.

Subsequently, the workers split themselves into two groups of eight and 11, and the other group of 11 had moved in a different direction.

He said that a 25-member team of the SDRF accompanied by the police and local volunteers have been conducting search operations for the remaining missing people in Damin circle.

The 19 workers, mostly Muslims and residents of Assam, had been engaged by a contractor to work for a road construction undertaken by the Border Road Organisation (BRO).