The 73rd Independence day in  border district, Tawang was celebrated with full pride and enthusiasm. Tesring Tashi and Jambey Tashi unfurl the tricolour in Tawang and Lumla.

The 73rd Independence day in  border district, Tawang was celebrated with full pride and enthusiasm. The entire district vibrated with slogans by students taking out prabhat pherrys on the auspicious occasion.

In district head quarter Tsering Tashi, MLA Tawang hoisted the national flag amidst huge gathering. In his address Tsering Tashi greeted for the day to all the citizens on behalf of Chief Minister  Pema Khandu and Government of Arunachal Pradesh.

He further paid his tribute to the freedom fighters and great leaders who contributed in making this great nation, he specially conveyed his gratitude to the Army, police, doctors, administrators, labourers, teachers and business community for their contribution in developing and shaping the society.

He appealed the educated unemployed youths to come forward and avail benefits of govt schemes meant for them for self employment.

Later Tsering Tashi distributed blankets to the gaon burahs and felicitated all the parade contingents and participants of games sports and cultural programmes, before leaving to Gyalwa Tsangyang Gyatso High altitude stadium after the lunch at circuit house to witness as chief guest of the Final match of Independence day cup football tournament organized by Tawang football association. 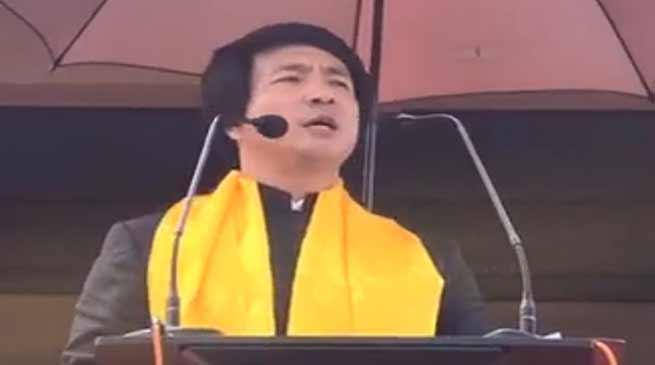 Jambey Tashi, MLA Lumla,  hoisted National flag at Lungla outdoor stadium. During his speech, Referring to global warming, Tashi appealed to the public to protect the forest. Tashi praised the Pema Khandu government’s most successful program “Sarkar Aap ke Dwar” and said that this program has greatly benefited the people living in the mountain and will also benefit in future.

Meanwhile, ADC Jang Lobsang Wangchu Bapu did the honour at Jang Headquarters. There are reports of Independence day celebration in all the administrative centres right from Zemithang to Mago.