The wrestler, who has appeared in four Hollywood and two Bollywood movies, was reportedly participating in the first event of ‘The Great Khali Wrestling Show’ at the Rajiv Gandhi International Stadium when he suffered the injuries. 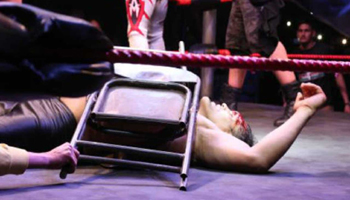 An “open challenge match” between ‘The Great Khali’ and Brady Steel of Canada at Haldwani had to be stopped midway after Steel and his companions beat up Khali, the challenger. “Khali received injuries on the head and was bleeding profusely near the left eye when he was admitted to a hospital midnight.

The Great Khali was having an upper hand in the fight when Brady Steel’s companions Mike Knocks and Lion escorted Steel out of the ring. When Khali tried to get Steel back into the ring all three foreign wrestlers attacked him and hit him with a chair which resulted into injuries to Khali,”

The freestyle wrestling event in which known wrestlers of the world participated was organised by the state government to promote tourism.

Born in a Punjabi Rajput family in Dhiraina, Himachal Pradesh, Khali was an officer with the Punjab state police before he became a professional wrestler. He won his first WWE heavyweight championship in July 2007.