“Let us inculcate the indigenous values and ethos amongst the younger generation and make them aware of our ancient pristine and precious knowledge to secure the identity and growth of indigenous faith”, said Deputy Chief Minister Chowna Mein while gracing the closing ceremony of 5th State Level Indigenous Youth Festival which concluded with much fanfare and enthusiasm here today. 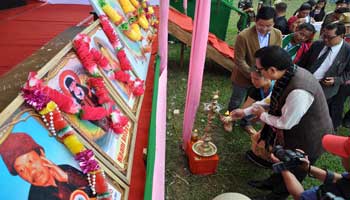 Speaking on the valedictory function, Chowna Mein who had cut short his Thailand visit to attend the festival, praised the IFCSAP for preservation, promotion and patronizing the Indigenous faith and culture of Arunachal Pradesh through a platform like Indigenous Youth Festival. In an era of modernization and globalisation, it is the responsibility of youths to carry the baton of rich traditional and cultural legacy which we have inherited from our forefathers, he said.

Chowna agreed to grant necessary fund for the construction of boundary wall of Government Higher Secondary School Tezu and also assured to address the passing of Priests Sermon Bill in their next cabinet meeting.

Function’s Guest of Honour MLA Dr Mohesh Chai, urged the youths to take up the responsibility to preserve and promote the values and culture of preserved by our forefathers and gift it the coming generations. In addition, he have made an appeal to the youths of the States to inculcate discipline and remained focus in their daily lives to excel in their chosen careers and stay away from substance abuses. 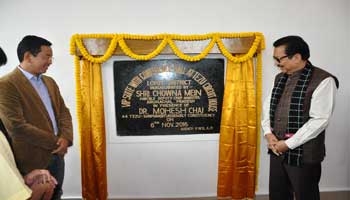 He thanked the IFCSAP for choosing Tezu as its venue and thanked all the host team member for their dedication and hardwork to accomplish this mammoth task. He further, wished all the delegates a pleasant memory of Tezu.

Talo Mugli speaking on the occasion has requested to the States Government that the Indigenous Youth Festival may be given most important place in terms of different festival celebrations in Arunachal Pradesh.

Welcoming the Guests, Shri Bai Taba, Secretary General IFCSAP thanked the Lohit District Commissioner Danish Ashraf and SP Isaac Pertin for their support and cooperation for smooth conduct of the festival. Without the Help of District Administration, Police, HoDs of various departments of Tezu and all those men and women who worked relentlessly day and night, this function wouldn’t have been a success, he said.

He also presented a two point memorandum to the Hon’ble Deputy Chief Minister. Which are allocation of compulsory fund under for Celebration of Indigenous Day on 1st December every year, secondly, passing of Priests Sermon bill, that is provision of providing Honorarium, umbrella, torch lights etc to local Priests.

Earlier, the Deputy Chief Minister Chowna Mein also inaugurated the VIP Suite with Conference Hall at Tezu Circuit House. Funded under SPA, the project was completed on 30 September 2016 whose executing agency was Public Works Department. The VIP suite has 4 rooms. The VIP suite at Tezu was necessitate as the district experiences frequent visit of many VIPs and high dignitaries on official purposes as well as pilgrimage to holy Parshuram Kund which is well known as pilgrimage spot in eastern Arunachal. The VIP Suite with Conference Hall at Circuit House campus would serve the purpose for VIPs and high dignitaries to meet and interact with the officers and public leaders during their visit to the district. 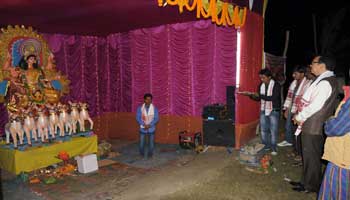 Lauding the efforts of PWD engineers, the DCM also suggested for constructing dormitory with proper bathroom facilities in the circuit house or VIP suites to accommodate the security personnel who accompany the VIPs during their visit to the districts.

Later, the DCM also attended the Chhath Puja organized by Namsai Chhath Puja Committee at the bank of Noa Dihing, Namsai.  It is an important Hindu Vedic festival, where devotees worship Sun god on this day along with his younger wife fondly called as Chhathi Maiya by the believers.   The people rigorously fast and abstain from even drinking water, take holy baths and offer prayers to the rising and setting sun on these days.