Chief Minister Pema Khandu also shared the glimpse of documentary on rich cultural heritage of Adi tribe  in his timeline.

A 31 minute documentary is a part of the project sanctioned by Dept. of Indigenous Affairs to document the cultural heritage of Adis. It depicts the rich cultural values, ways of worship, different dance forms, rituals, ornaments, knowledge of herbal medicines and the folk songs that speaks about the history and migration of Adis.  It also includes the important messages by renowned personalities to preserve and nurture the age-old cultural heritage.

“There is an urgent need of documenting various facets of our cultural life before it gets extinct. Each aspect needs to be documented and elaborated separately. Our language, dance forms, agricultural system, art of weaving etc. should be recorded audio-visually and published for the benefit of younger generation.” Said  Alo Libang. 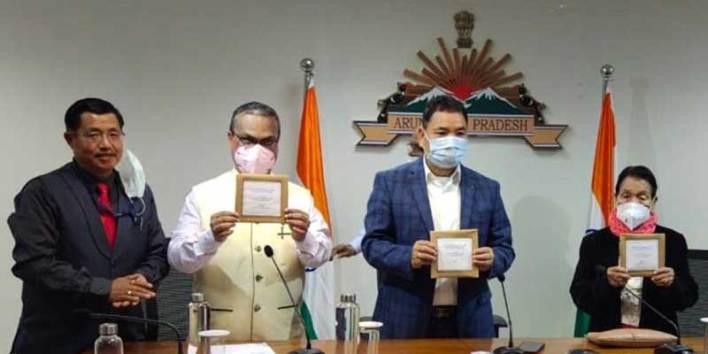 “Covering different aspects of 14 sub groups of Adis in one documentary is really a challenge. It becomes very lengthy, hence it should be in small segments, may be on each group separately.” Said Vijay Swami, Executive Director RIWATCH.

Earlier, a MoU was signed between Dept. of Indigenous Affairs and RIWATCH for grant assistance by Govt. of Arunachal Pradesh to strengthen various activities of RIWATCH.