Itanagar traffic police is waiting for a mishap at Bank Tinali Traffic Point which may occurred any point of time wherein any traffic warden of traffic personnel may face. 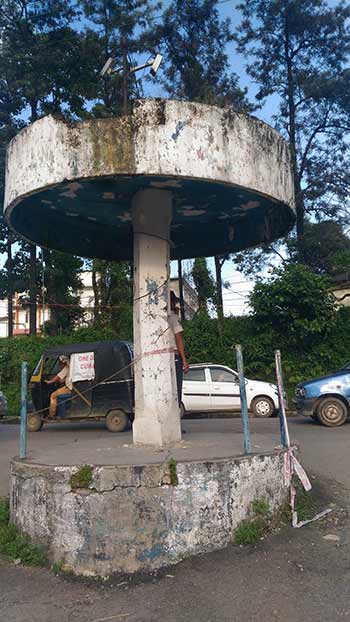 The traffic point which is located on NH-415 at Bank Tinali is in horrible condition and is about collapse. The said traffic point is strategically important as the main junction of the township where the busy traffic flow is a matter of concern and due to which the capital administration have ordered No Parking Zone in some parts of area recently. The no parking is also enforced by the security personnel and Traffic Warden as well as Traffic personnel for last 1 month right from traffic point to Hotel Ane for two lane continuous flow on the said stretch of road.

However there is no other stage/stand/shed where the traffic personnel/warden could stand while regulating the traffic flow and a mishap could happened at any time and is liable for life threat specially for traffic warden/traffic police and even may to commuters. The condition of the traffic stand is in pathetic condition and huge crack have developed after it was hit by night riding vehicle several occasion which have never been repaired.

The capital police/Traffic cell or the Highway department may take the cognizance for time period as the highway construction have recently began but we may not take a risk for the life of common man/traffic warden/traffic police in between the said period.

SP City Incharge MS Brar said that for immediate repairing I am writing to Capital district administration and Highway Department. However under construction of Highway  is long term plan for which  I shall not wait for accident to takes place. Temporary is urgently required Brar added.