While extending his greetings on the International Women’s Day, Chowna Mein said the government is committed and focused on women empowerment and towards this direction, the government has implemented many women welfare schemes and programs in the State.

Mein said that today the day is celebrated to appreciate the achievements of women in social, political, and cultural fields. The day marks the contribution of women and girls around the world who are leading the charge on climate change adaptation, academics, business, and building a more sustainable future for all.

Mein added that this day is very important for the women as it offers an opportunity to reflect on progress made, to call for change and to celebrate acts of courage and determination by ordinary women who have played an extraordinary role in the history of their countries and communities.

Mein urged upon to pledge to pay respect and love women for the role they play as a mother, as a sister and as a daughter and not only to make them aware of their rights but we must give what is due to them for we cannot imagine a family, which is the nucleus of the society, without women.

He said that the day is of great importance to raise the spirits of women and appealed to remove the inequality spread in the society. Today, there is no field or arena, where we can say that women are lagging behind rather I am optimistic to say that one day women may overtake men in many arena of life.

“The role of women is much different today than it was in the past,” said Mein and added that today, women work outside the home much more and their role are multi-functional. They compete for jobs with men and working in every fields, though they still face discrimination. They also have more power than they have in the past.

Highlighting some of the welfare schemes for women in the State, Mein informed the state government have opened exclusive Women Police Stations in Itanagar, Pasighat, Tezu, Ziro and many more to be opened in the District Headquarters to deal with the women related crime.

He also said that the State Govt also runs Swadhar Greh through NGO Oju Welfare Association for destitute women where the women can stay longer time and primary needs of shelter, food clothing and some vocational training is taken care.

He also mentioned that to economically empower the rural women for their self-sustenance, State Govt in the recently held Golden Jubilee Cabinet Decision at Ziro has assured financial support of Rs 1 lakh each to 500 top women SHGs. Besides that the government have also decided to provide an additional fixed deposit of Rs 5000 as top-up amount over existing Rs 20000 under ‘Dulari Kanya Scheme’ to the Golden Jubilee Daughters’ born between 20th January 2022 to 20th January 2023, said Mein.

Mein said there is no dearth of talents in the state and to recognize those talents advocated for initiating an Achievers’ Award by the government who has excelled in their chosen area of activities ranging from literature, art-culture and sports. 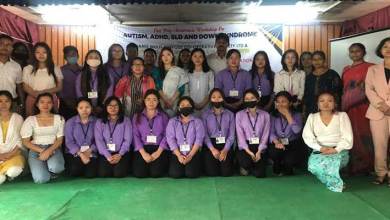