The Galo women are all set to celebrate the two day long Nyirmen Festival in collaboration with Donyi Polo Dere Trust Committee in a big way at Gumin Kiin on 14th and 15th October. This festival of merry-making and laughter is associated with Galo women from time memorial and was a source of joy and amusement after coming out from the drudgery of manual labour and pains of the harvesting year. They even dress in menâ€™s attires to wrest all initiatives to keep the men folk in all domains on the day.

Colourful traditional dress competition, traditional hand weaves and handicraft show, traditional games and sports, dances, comics and laughter induced anecdotes on the day. Efforts are being made to involve all women representatives from different parts ot the district to make it a festival to be reckoned with in the years to come in all Galo areas. 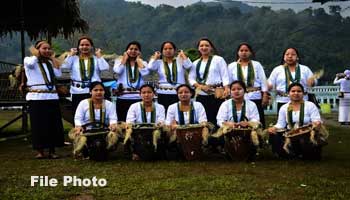 This Nyirmen festival marks the beginning of Galo New Year and traditionally initiated by the women folk of our society and can be coined as Women Day in their tradition. This festival has its legacy from ancient time when women folk congregated to rejoice and indulge in merry making after harvest to overcome the drudgery of manual labour in the off month of October. On the day the women use to wrest the entire initiatives by serving food and drinks managed by them and even attires of men folk and dances are performed by women to make mockery of men folk to give them the back seats.

The comics that led to paroxysm of laughter, the presentation of Erap and Tanu Nunam usually associated and performed by male members, were presented by women to spell bind all genre of audiences. The songs, drama and dances performed on the day gave deep insight into our tribal music world.

Like all culture and religion, Galo women folk too had that idealism to guide the society from time immemorial. The hard working women folk in ancient days started this festival as a means of get together and rejoicing and it went on as a regular celebration.