The first medical college of Arunachal Pradesh – the Tomo Riba Institute of Health and Medical Sciences (TRIHMS) began its maiden academic session as Chief Minister Pema Khandu handed out letter of admission to the first batch of MBBS students here at the institute’s Main Ceremony Hall.

“Today is a historic day for Arunachal Pradesh particularly in the fields of health care and medical education and will go down in the history of state in golden letters,” said the Chief Minister in his address during the induction ceremony.

“I express my appreciation and congratulations to all the people, who burned their midnight lamps and worked overtime with zeal and enthusiasm for many years to make this dream of having a medical college in the state a reality.”

The Chief Minister said the opening of the first medical college has been made possible by the generous funding received from the present Central Govt under Prime Minister Narendra Modi and Health Minister J P Nadda. 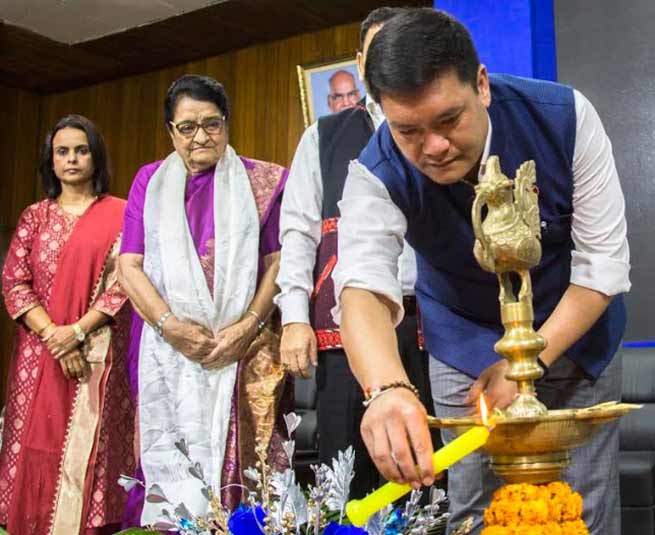 He said a medical college and hospital at the doorstep will extremely ease the burden of the needy and poor who have to depend on other parts of the country at considerable expenses both for medical education and treatment.

He thanked all former Chief Ministers late Dorjee Khandu, late Jarbom Gamlin, late Kalikho Pul and Nabam Tuki for making the dream of having a medical college in the state a reality.

Also stating that this medical college would not have happened without the faculty members, the Chief Minister thanked them for enabling the beginning of the session by sacrificing their comfort zones and joining TRIHMS to serve humanity in this remote part of India.

“I would like to especially thank Prof. P. Jayakumar, the Dean of the new College, for being the first employee of TRIHMS,” said the CM.

He further extended his congratulations to the first batch of students, faculty, administrators and employees of the institute for being a part of the history in making.

The Chief Minister also expressed his gratitude to Dr Jayshree Mehta, President of Medical Council of India and other members for their benevolence and support for opening of the medical college. “As Arunachal Pradesh is still an evolving state, I believe MCI will continue its support and guidance for growth of this institute,” said the CM.

He said the institute so far has filled up 39 seats mainly from the state quota and is awaiting 11 more seats to be filled under central and NRI quota. However, as per the decision taken in TRIHMS governing body meeting if the seats remains unfilled over certain period of time, those seats will be filled as state quota, said the CM.

Speaking on institute’s expansion plan, the CM said within the span of two years, the institute plans to increase the intake of MBBS students from 50 to 100 and hike the number of beds in teaching hospital from 300 to 500.

He informed that the institute in 3-5 years will introduce post graduate courses in para-clinical and clinical subjects. He also informed that within one year the super-specialty departments of cardiology, paediatric surgey and oncology will be added in addition to the departments of urology, neurosurgery and gastroenterology to be added in 2-5 years. An emergency and trauma centre will also be added in another in 2 years, the CM informed.

Earlier speaking on the occasion, Deputy CM Chowna Mein called on all the concerned to devote their best to make TRIHMS as one of the best medical institute in the country. Also speaking on the occasion, Health Minister Alo Libang requested the MCI for considering the request of state government to increase the MBBS seat in TRIHMS from 50 to 100 and for expanding the 300-bed hospital to 500-bed.

Dr Mehta in her speech lauded the vision of Chief Minister for the development of Arunachal. She hoped that under the leader of Pema Khandu, the TRIHMS will emerge as one of the best medical colleges in the country.

On the occasion, a souvenir of the TRIHMS was released by Chief Minister.