Congress today demanded rollback of the hike in fuel prices and appeal the Arunachal govt to work out the modalities for reduction of fuel prices.

Arunachal Pradesh Congress committee (APCC) today appeal the state government to immediately work out the modalities for reduction of prices of fuel in state like few state of country have done for the greater interest of their people.

Addressing  a gathering on the occasion of interaction and felicitation programme of congress workers and party leaders of Kra Dadi district and Tali Assembly constituency Sanjoy said that that the fuel price though depend on the rate of crude oil in international market but is the government of India who need to think that it is increasing like a fire and sky rocking price  of fuel have been badly affecting the economy, business and industry as well as affecting the pocket of an individuals who have vehicles and even the passengers who use vehicle and travel to other places.

Few state of country have adopted measure to contain the prices of fuels. Accordingly Arunachal government should also act on it keeping in view the fuels is directly and indirectly have association with all activities of day to day affairs of common man and housewife in kitchen.

He said that the congress is becoming stronger than before after two MLA from PPA have merged into congress and we are having a rally at Palin and we are spreading our activities from capital to district and hope that the new faces and young generation can understand the vision of the party to have communal harmony with secular agenda for development of state and country. 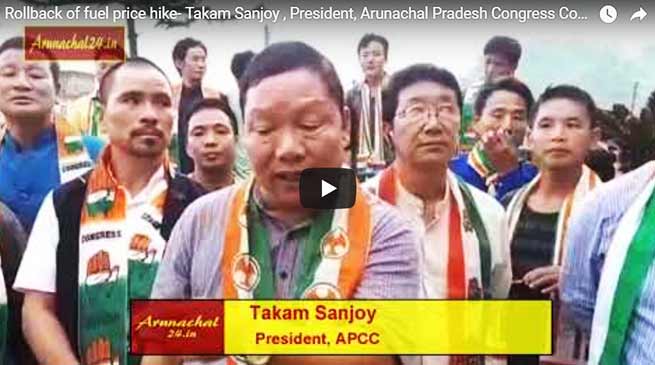 Tali MLA Markio Tado while said that joining to congress is a homecoming as he won the seat from the INC party in 2014 and do not feel much change in the leadership as he have been serving the people of Tali with outmost sincerity and dedication and shall continue to do so and sought support and cooperation from the local people of Tali.

He said the voters are the most deferential factor and he is having the support of majority as there have been political rumour that many workers are joining to other party and termed it as run of leadership for party in BJP in the constituency.

It is nothing but to damage his position these rumours are spreading in the constituency and he is still holding the support of grass root workers and locals and others.

He said he have worked for the betterment and development of Tali which are done in phase manner and shall continue to do so.  Development is not a miracle but come up in systematic way. he said that there are many leaders and workers who would join congress as there are still time for general election and the party have still hold at grass tooth.

A total of 150 party leaders have been appointed today who would go to their respective area and work for the party. Tado added.