In a major breakthrough, the capital police on Monday busted a gang of bike lifters by arresting four persons and recovering sixteen stolen bikes from different parts of the city.

Capital SP Sagar Singh Kalsi while talking to media said that recently on tip of information received to capital police the network of the two wheelers theft was busted and four of the members were arrested and remanded to custody.

“However the remand is going to expire today, but we  appealed  to the court for remand of three more days, because we have got link of few more theft from Tezpur and other places” SP added.

Kalsi said that a group was apprehended tip on information based raid was conducted and several incrementing materials including tools and petrol 40 ltrs, 4 arrested person were interrogated in connection with the theft of several two wheelers on April 8 on Itanagar PS case No-108/18 u/s 379 IPC from Dony Colony on Jully road on April 9. 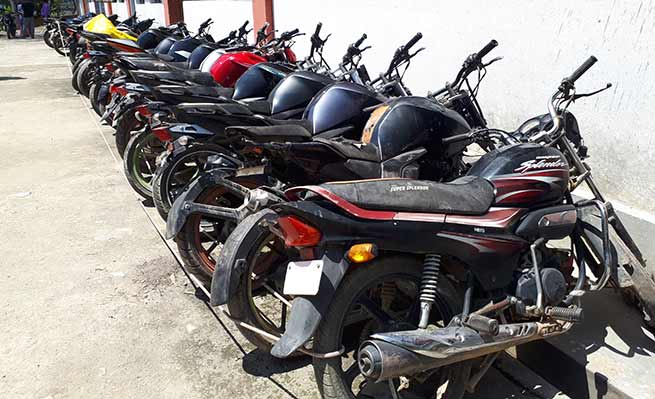 Further it is expected that the numbers of two wheelers will be increase as the investigation is on and efforts are being made to arrest the other associate members of the gang.

Kalsi excepted that the trend of theft of two wheelers have been increased and these incidents occurred during the night hours from 8-12.  Youth who are doing this type of crime are drug addict. Parents should  guide their children for does and don’t.

Capital Police is for all and we are alert and careful but the denizens of capital complex should also need to be careful and alert. We should not encourage our children to get involve in drugs and allow them to attend late night party.

He show concern of involving of small children in drugs as it was experienced in recent past of apprehended small boys in theft and such case who were sent to jubilee home.

He also suggested to have GPS system fitted in all types of vehicle which would help the police as well as owners to have some clues upto where the network is available.

Meanwhile  there have been a total nos of 71 theft cases of two wheelers have been registered in capital complex and 36 alone in Itanagar PS out of that 23 have been recovered by Itanagar PS in only March/April.

Appreciating the team efforts of the police personnel’s of Capital Kalsi have lauded the team efforts and praise the work done by the personnel and officers under his supervision and advice them to continue to serve the society with renewed zeal.