The Senior leaders of BJP of Arunachal Pradesh, including state president Tapir Gao remembered father of nation Mahatma Gandhi with series of social programme held in the city.

The main attraction of the function that they cleaned the whole park,  cleared all plastic , wet , long grasses and disposed the garbage properly by the vehicle of the IMC. 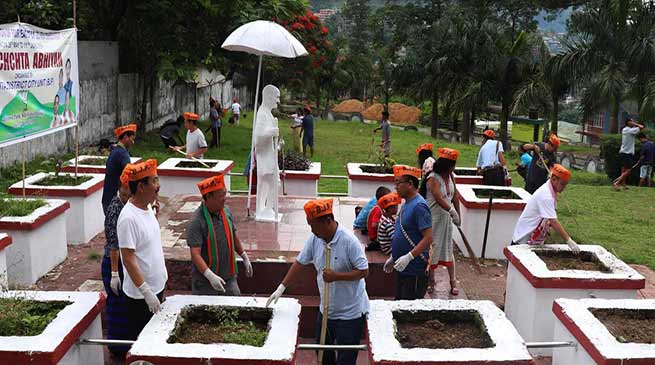 The dignitaries cleaned the statue of father of Nation Mahatma Gandhi and garland the portrait also  not only that, they also take part in plantation programme.

Addressing the media Gao said that all these programme are the part of the four year celebration of Narendera Modi led BJP government at centre and smooth functioning of the Pema Khandu led government in state.

He said that government is for the people and the Pema Khandu led government is functioning smoothly with support of all stake holders in state and sought continuous support for all round development.

Techi Kaso appeal the citizens for maintaining cleanliness and hygiene at all places which shall keep ourselves disease free. He also appeal to not to throw any garbage here and there so that the garbage lifting vehicle of IMC could lift the garbage without getting any problems.