The Panel discussion of  theme  ‘Freedom of Expression-Mirage or reality- was dominated show in the concluding day of Arunachal Literature and Arts Festival ( ALAF )-The Prelude here at Indira Gandhi Park.

Noted novelist Ankush Sakia, cartoonist Jene Hai, the local rapper K4 Kheko and senior journalist and Deputy Editor of The Arunachal Times Tongam Rina were among the panellists on topic. The panel was moderated by noted journalist Ranju Dodum.

Each panellist shared their own experiences to express their thoughts and ideas through arts and media and also reflected predicament and challenges in freedom of expression.

The panellists concluded ball of freedom of expression has to be rolled on through distinct medium and young minds should speak up on issues.  K4 Kheko disclosed people cynicism on his Arunachali Hindi rap, where in his rap song talks about racism, drugs, insurgent and politics.

Similarly, Jene Hai shared people name him as pro-BJP over his political cartoons he draws in State of the State, in Eastern Sentinel. While, Tongam Rina also talked about how organisations in Arunachal pose as threat to freedom of expression by interfering editorial discretion.  Ankush Sakia divulged how he attempted to bring out reality what he sees in day today life in his books through figment of imagination. 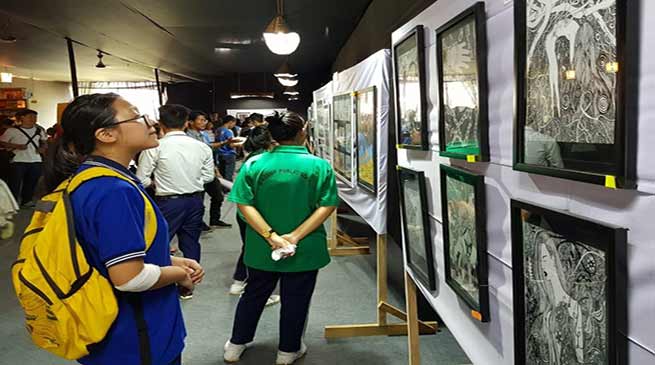 Similarly, Ete extolled woman right group of Changlang district for stood up against extortion of insurgent groups. She also dwelt on various social issues related to woman including polygamy and prostitution.

Naga Artist Throngkiuba Ymchingru(Athrong) talked on journey of arts and its social impact. He enthralled arts lovers  by sharing his experiences of arts.

Earlier on Saturday Deputy Chief Minister Chowna Mein called upon the younger generation of state to come forward and extend their hands in state building.  Mein was speaking as chief guest during the inaugural day of maiden Arunachal Literature & Art Festival (ALAF)-The Prelude being held at Indira Gandhi Park here.

Featuring over 65 creative artists, writers and publishers, during the two-day art festival, young minds and artists from the across the state will come together to widen the horizons of their creativity.

“Though I have no idea about art & literature, yet I can be a promoter or facilitator,” DCM said, while lauding the organizers of first ever Arunachal Literature & Art Festival. He offered all possible help from his side for promotion and preservation of state’s rich literature & arts.

“Reading good books enrich our knowledge about various aspects of life,” he said.

Arunachal Pradesh is a late starter, but in recent past the state has made tremendous progress in every field, he said and added that today state has its own specialist doctors, engineers, top level bureaucrats etc.

“State is rising and it’s a positive sign,” he said and added that the new generation will have to shoulder the responsibilities by coming forward in state building.

Secretary Tourism Sadhana Deori, while stating that guiding a large team is tough-it is never easy to come to a consensus on how best to mould an article or art by an enthusiastic writer or artist, said, but the Arunachal Literature and Art Festival Organizers have been able to bring forth the first time under its banner various artists, poets, writers, social activists and cultural reformers to have a discourse on various aspects and charter a way forward for a better tomorrow.

She exuded hope that the prelude of ALAF will be successful in its attempt to bring forth a wave in the literary scene in the state and the people who come will take away something fruitful and wonderful from these following two days of basking in the smell of paint and getting lost between words.

On behalf of the Tourism department, she also call upon the Organizers to come and join the department’s calendar of events to add  more feathers and spread the Arunachal Experience to the visitors who come in search of solace to make an instant connection with one of India’s most favoured destinations in the north-east.