Holding the commission responsible for the deteriorating state of affairs in the recently held Mains examination, the scholars’ forum said that over the years the commission has become a nightmare for the candidates with its performance declining rapidly.

“Uncertainties have been committed by the commission and the court, so why should aspirants be agonised. The inefficiency of the district administration to take necessary precautions before the exam is also a serious disregard in taking care of the law and order, faithfully. The feeble response and half-hearted treatment shown by the state government on this proliferating issue is another spark plug that is giving the agonised candidates a hard time. This is sheer callousness and utter failure of democracy,” the RGURSF said.

Referring to yesterday’s court verdict, the forum said, there is a strong view that both the preliminary and mains exam would be quashed by the court. If this is the case, what is the point of conducting the examination and forcing the students to toe the line of the APPSC? Who would be held responsible if the result of the mains exam is quashed? 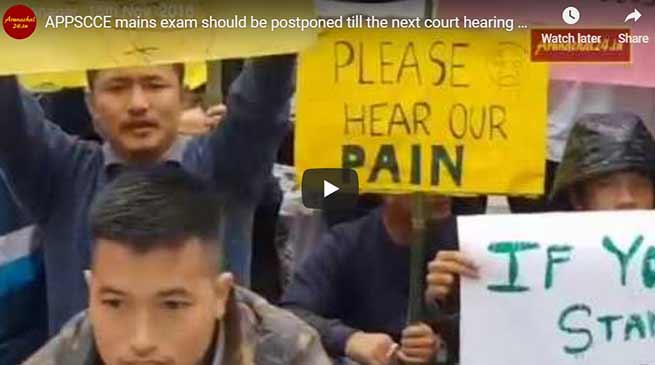 The mains exam should be postponed till the next court hearing for the benefit of all, the forum suggested, adding that the commission should find a better way out in standardising the civil-service exams.

“Amidst all these uncertainties, the commission should rather ‘pause and rethink’ and prepare for an ‘overall re-conduct of preliminary examinations’ adopting the CSAT exam pattern and at the same time increasing fresh posts. However, there should not be any collateral damage, like age bar. Such cases should be given special exemption. Forcibly going ahead with the exam will only worsen the situation,” the largest body of research scholars in the state said.

The RGURSF has also demanded the commission to not outsource the question-setting to one particular company, rather seek suggestions from all quarters. Recommendations should be taken from various experts out of which the commission may select the questions suitable.

Perhaps the most frustrating feature of our state is the commission. With its lackadaisical, unprecedented and unpardonable blunders, the commission is quickly losing its credibility and objectivity. The so-far least bothered state government should also think twice about its obligations towards the aspirants and intervene immediately to find out a remedy for this irreparable disaster, it further said.