The Royal Arunachal Riders (RAR) on Monday carried out awareness on ‘cleanliness ride from Ganga Lake to Itafort ’ organised by department of Tourism, government of Arunachal Pradesh for mass awareness among the denizens of capital city.

The riders of the RAR carried out their ride wearing clothes depicted we clean out city and we need to support in making our city and tourist spot.

The rally was flag off by Itanagar Tourist Information Officer (TIO) Tana Dalin Tara at Ganga Lake which cover all,  both Gompa of Itanagar, Vivek Vihar and 0 Point Tinali and culminated at Itafort wherein the members take part in social service at the Itafort campus.

RAR Vice President Vickey Punung while elaborating the motto behind such ride which have carried on several occasion earlier for a cause of humanity like providing of donation for fire victims and other social cause. He emphasis on making cleanliness of our work place, school, college and everywhere we live and stay so that everyone remain disease free. 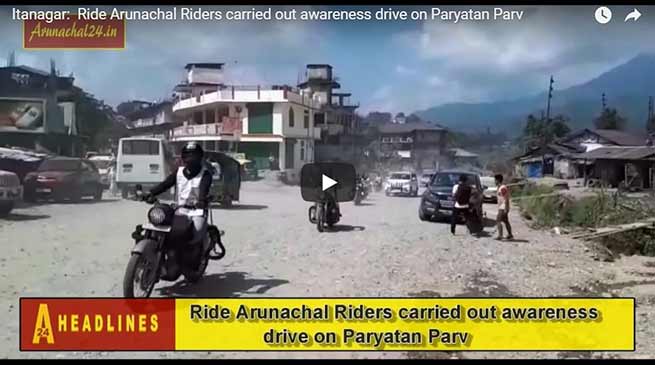 TIO Tana Dalin Tara also address the riders at the flag off point and appeal the civilise citizens of twin capital to maintain our city clean and green. He also elaborated the Bharat parv and other activities celebrated across the state and country from Sept 16 to 30.