Traffic movement effected due to mudslide in between Papunallah-Yupia and water logging in between Itanagar-Papunallah road via Jully triggered due to heavy rainfall.

Heavy downpour triggered mudslide and water logging at several places this morning. As per report the bypass road between Itanagar-Papunallah Via Jully blockage this morning due to mudslide on the road since last night.

PWD, Capital Division ‘B’ Engineer, Basar inform Arunachal24 that the blockage was due to flood water which overflow a humepipes after it was chocked.

Workers have been deployed to clear the Humepipe. It may take sometime as huge volume of rainwater is overflowing and the traffic on the road has also been badly affected. Basar added.

Capital Complex, District Disaster Management Officer, (DDMO) Moromi Dodum while inform that she is in touch with PWD official and hope that the blockage is cleared soon and traffic flow will be maintained. 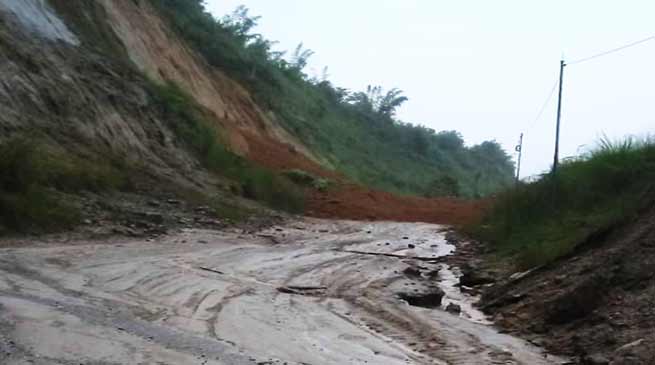 Local resident from try junction of Yupia in Naharlagun inform that the portion of road on Trans Arunachal Highway ( TAH)   near Sood Village between Papunallah and Yupia have got blockage due to massive landslides .