The Governor of Arunachal Pradesh Brig. (Dr.) B.D. Mishra (Retd.), accompanied by the First Lady of the State Mrs  Neelam Misra visited the Raj Bhavan Children Park in the Raj Bhavan Complex, ‘B’ Sector, Itanagar on Sunday and interacted with the children playing in the Park.

The Governor ever after his arrival in the station has been taking keen interest in developing the two Children Parks and has provided more play units in the Parks.

The Governor and the First Lady of the State felicitated the children and distributed snacks, Ice Cream, juice and cakes prepared by the Raj Bhavan.

The Governor exhorted the children to play in the park and also take part in games and sports. He said that along with studies, they must be physically fit. He told them about the grand old saying, “Healthy mind in healthy body”. 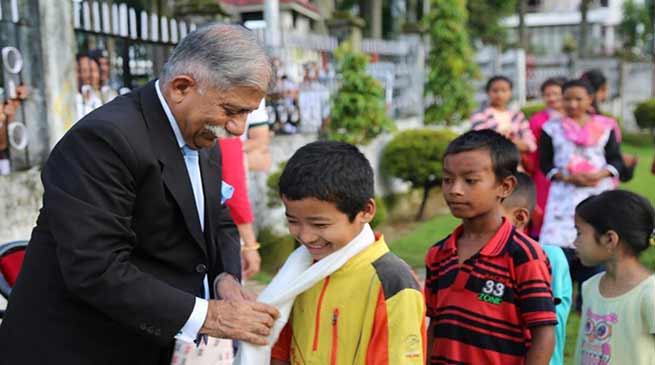 While stating that for the children to excel in life and become better citizens, they must be mentally and physically fit, the Governor emphasized on the need of play fields in various localities as also in the schools throughout the State.

The Governor said that in the electronic age, most of the children are busy in video games and television programmes. They may be brilliant in their studies but playing on ground in open air, in the lap of nature, has its own significance in shaping the body and mind.

He called upon the parents and guardians to encourage the children to take regular physical exercise and engage in outdoor activities.

The Governor has been regularly emphasizing on the care takers of the Parks to pay attention to the safety of the children. He instructed that the Parks must be clean and the playing amenities must be in serviceable condition, the Governor stressed, while commending the Department of Environment and Forests for maintaining the Raj Bhavan Parks.

He appealed to the corporate houses, NGOs, District Administrations and Government departments to adopt children parks and maintain it in other towns of the State.