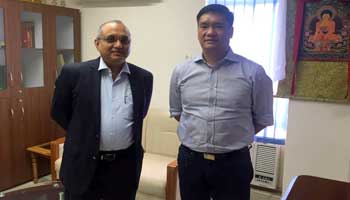 In his meeting with Director General of Confederation of Indian Industry (CII), Chandrajit Banerjee, the Chief Minister pitched for partnership with the CII to attract investors in the state.

Accordingly as assured during his Independence Day speech, the promise for constituting an Arunachal Pradesh Investment Advisory Council, CII was requested to provide expertise in making this a reality.

The Advisory council with members from industries will advise the state government in formulating policies for attracting private investments in key sectors such as agriculture, horticulture, IT, tourism and hydropower sector. CII will soon constitute a team of experts to study the potential of the state.. To fast track hydropower development in the state, the Chief Minister discussed on key issues with NHPC Ltd Chief Managing Director, KM Singh, who had called on to prepare a roadmap for faster execution of all the pending projects.

CM Khandu, on the dayalso met North Eastern Council (NEC) Secretary and discussed on the important projects undertaken by the state government under NEC. He specifically requested him to expedite clearances of important schemes lying pending with the NEC for larger benefit of people.