A total of 186 vehicle have been fined and a total of Forty seven thousand have been realised as fine under various section of MV Act.

Follow the MV Act or face the Action, said District Transport Officer, Chakfa Wangsu during the checking of Motor Vehicles at Lekhi on Thursday. Talking to Arunachal24, he informed that, ” It is a system through which we stopped the people and asked them not to disrespect the law and obey traffic rule”.

As per order of the Capital Deputy Commissioner Himanshu Gupta, the motor vehicle checking was held at various location simultaneously in Itanagar, Naharlagun and Nirjuli respectively.

A total of 186 vehicle have been fined and a total of Forty seven thousand have been realised as fine under various section of MV Act. Tinted glass were removed from more than hundred vehicle .

Main motto of such checking is not only to realise the revenue through fine and challan of various violation of the  Motor Vehicle act but it is to give awareness to the commuters to follow the rule of law which is equal for all.

Capital Superintendent of Police, Tumme Amo inform that the traffic checking are contentiously done by capital police but today it was done simultaneously at three location. Our main target to make aware the defaulter, like wearing of helmet by two wheeler riders, do not overtake in traffic jam, do not park vehicle on roadside etc, said Amo. 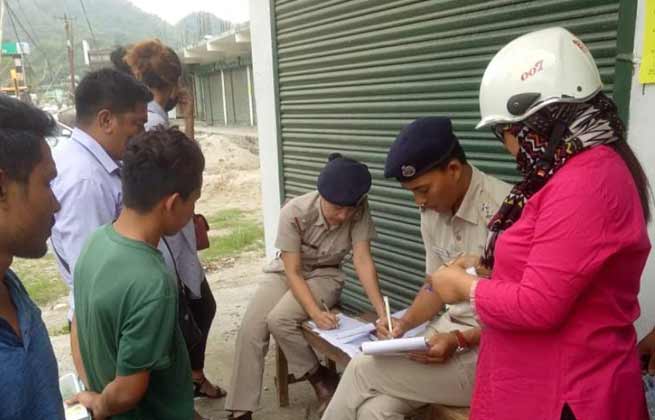