The Heavy rainfall since last three days has triggered multiple landslides at several locations in Bomdila, Dirang, Singchung, Nafra and  Kalaktang are of  West Kameng District,  resulting in traffic blockade, disruption in power and water supply and major damages to private and public property.

There has been abnormal rise in water level reaching danger zones in rivers and streams of Dirang, Tenga and Rupa areas. Due to landslides at several places, vehicular movement on township roads as well as BCT and OKSRT roads has been disrupted. Reportedly, the district water supply source at Mandala and Hydel stations have been badly damaged. 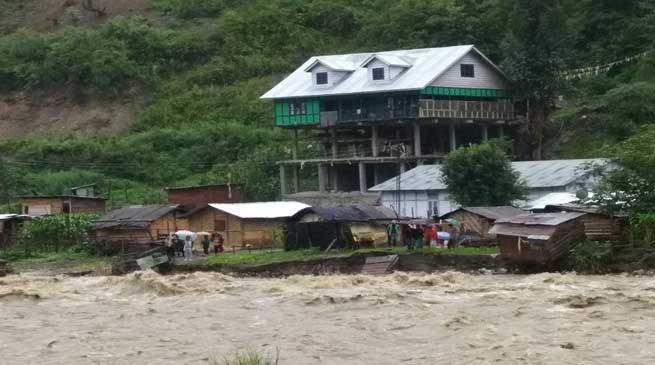 Approach road to power house was snapped due to massive flood triggered by rainfall. A landslide at Rahung has engulfed power and feeder channel, besides the main incoming line from Khuppi to Bomdila has been damaged and attempt to restore the road was unsuccessful due to road blockage at multiple locations near Jamiri point , Dedza, Sessa, Munna Camp , Nechiphu and Bana .

Works of landslide clearance are in progress by BRTF as the rain continues. Emergency operation centres have been functional since last three weeks and all department resource inventories have been updated by the DDMO, according to an official report.

Meanwhile, District Administration in view of hostile weather conditions had put all Administrative outposts on 24 x7 alert and night police patrolling enforced along river side.

Apart from that, District water supply source at Mandala has been reported dislocated between 9-10kms and   Hydels under BCD including de-siltation tank at  Zhangdongrong,  has been badly damaged due to deposition of silt and debris alongside the Trench wier and trash rack  at Dirang.