Arunachal Pradesh Chief Minister Pema Khandu said that the  “health is a priority sector for his govt” and his govt would ensure to implement all the flagship programmes of Govt of India in the state in letter and spirit. He stated these thing during the launching of the state wide Intensified Diarrhoea Control Fortnight 2016 today at Itanagar. 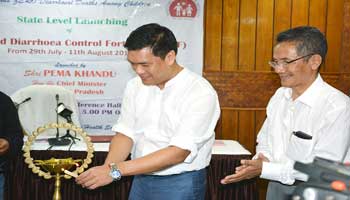 In the launching programme, Chief Minister make a clarion call to make 100% achievement of IDCF in the state by reducing children’s death due to diarrhoea to zero percent.  To achieve this objective, he appealed to all the health workers, ASHA Volunteers, Anganwadi workers, Panchayati Raj Members, NGOs, Public leaders and health officers to work collectively and wholeheartedly. He appealed to the people to make full benefit of the programme and minimize the death ratio of the children below 5 years.

Chief Minister also administered ORS to the children during the launching programme.

Hage Kojeen, Commissioner (Health) in his introductory speech informed that the third Integrated Diarrhoea Control Fortnight 2016 is being launched in the state with an objective to achieve zero diarrhoea death under 5 years. IDTF 2016 would cover 1.71 lakhs children under 5 years in the state and the programme would be implemented in collaboration with all the line departments like health, education, women & child development, Rural Development & Panchayat, he added.

P N Thungon, Mission Director, NRHM informed that 10% of death among the children is due to diarrhoea and IDCF is being launched with a motive to reduce child mortality under 5 years of age.