Chief minister Pema Khandu assured that the Government will leave no stone unturned to apprehend the culprits behind the killing of DSP Bomto Kamdak of East Kameng district. The Chief minister also informed that two platoons of special commandos have left for Chayang Tajo under the command of a DIG. Local police has already started its search operation to nab the culprits, he added. In a stern message, the Chief Minister has affirmed that the state government will never compromise with criminals irrespective of community, position or clout. 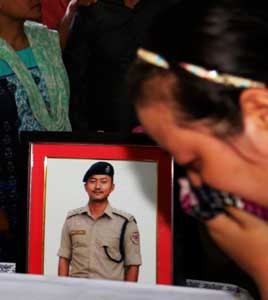 Khandu visited the private residence of the late police officer at P-Sector here, where the mortal remains were brought from Seppa in a Chopper this morning and was kept for public darshan.

Khandu today deeply mourned the death of Deputy Superintendent of Police Bomto Kamdak, who made the extreme sacrifice in the line of duty in East Kameng district.

The Chief Minister laid floral wreaths to the martyr and paid his homage to the brave soul. He met the parents and the relatives of the Late officer and offered his heartfelt condolence and prayers for peace of the departed soul.

In his condolence message to late Kamdak’s father, he said that Late Kamdak’s courage and dedication to duty as an upright officer of the state police department will always be remembered by the people of this state.

“I know this is the most trying times for you and family members to cope with the irreparable loss. I hope my humble words of consolation would ease the grief even if a little. In this moment of grief, me, my family, colleagues in the Government and people of Arunachal Pradesh extend our solidarity with you and share the pain inflicted on you,” said the Chief Minister.

Meanwhile, Khandu later had an internal discussion with the Chief Secretary, Principal Secretary Home and DGP on ways and means to honour the martyr. It is expected that the Chief Minister will announce the same tomorrow in his Independence Day speech.