“Festival is the social fabrics that binds the society together and add colours and beauty to the society” said Deputy Chief Minister Chowna Mein while attending the Golden Jubilee Nyokum Yullo Celebration at Joram as Chief Guest on Saturday.

He suggested the organising committee to document the celebration of Golden Jubilee Nyokum Yullo in written form for record and to preserve it in the newly constructed art gallery for memory so that the next generation may also able to see it.

He further said that as our festivals passes through transformation along with cultural, developmental and social transitions with the passage of time, let us not loss and forget the original ethos and values of the festival we have inherited from our forefathers which is diminishing day by day.He advised the members of the community to contribute in conservation of the dwindling rich cultures of the State and its traditions and appeal all to actively participate in all indigenous festivals of the State. He called to preserve and pass it on to the next generations.

He informed the gathering that this year, budget would be prepared with a difference and for this the State government headed by the Chief Minister Pema Khandu had a pre-budget consultative meeting with various Community Based Organisations (CBOs) recently to seek suggestions from them for inclusion in the State budget, which was fruitful.

He said that state has huge potentials in agriculture, horticulture and allied sectors and the State government would also give priority to these sectors in the coming budget.

Speaking as guest of honour, Minister for PHE & WS, Bamang Felix said that youths of today are forgetting the traditional customs of the society and it is high time that intellects from the community come together to discuss it on an open forum on preservation of the aged-old culture and tradition.
Parliamentary Secretary Tax & Excise TapakTaku, Chairman Nyishi Elite Society BengiaTolum, Chief Information Commissioner who is also the Chairman of Golden Jubilee Nyokum Yullo Celebration Joram Begi also spoke on the occasion. 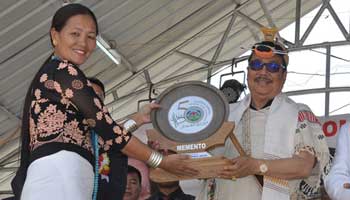 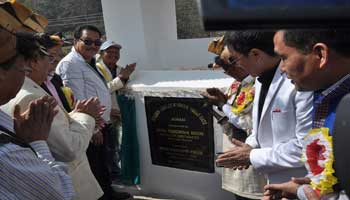 Mega Dance and melodious songs by Licha Pena and Nyishi idol finalist Gime Taping were other attractions of the festival besides food stalls and other cultural programmes.

Earlier the entourage of Dy CM was also given a rousing reception by the celebration committee Nyokum is one of the major socio-agricultural festival of Nyishi Community of Arunachal Pradesh since time immemorial. To commemorate the 50 years of its official recognition during NEFA time, Golden Jubilee Nyokum Yullo Celebration Committee 2017 is celebrating this year festival with the theme ‘Celebrating Identity Celebrating Existence’ and organized the 50th anniversary celebration in a grand way at Joram village, where it first started in the year 1967. The celebration which begun on February 10 will culminate on February 27.