Successful candidates from the state who recently qualified the country’s most prestigious civil service examination conducted by UPSC called on Chief Minister Pema Khandu at his Civil Secretariat office today.

While congratulating Ms Masanda Magdalin Pertin, Phurpa Tsering and Dr Ojing Dameng for clearing the UPSC Civil Service Exams, Khandu said it is historic for Arunachal Pradesh that four candidates from the state cleared the prestigious examination in a year. Another successful candidate Duyu Kampu couldn’t make it due to her ongoing training.

“I would like to place on record that this is a true recognition of your sincere endeavour and never say die attitude which is sure to inspire thousands of aspiring candidates from the state appearing in the prestigious examination. You have set an example for others to emulate,” Khandu said. 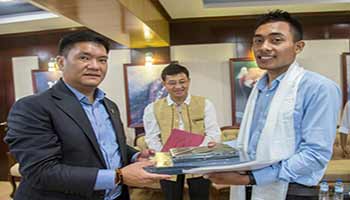 He hoped that the young bureaucrats will continue to put their best foot forward and bring many more laurels to the State. He categorically called upon them to not merely confine to their assigned duties but go beyond to work for the betterment of the society.

“You have the onus of serving your people and the state whenever given the opportunity,” Khandu said to the positive nod of the three.

The successful candidates were accompanied by their parents during the call on.

On the day, Cadet Sumwang Wangsa, who recently qualified for NDA also called on the CM. He is the first candidate from Tirap and Longding district to qualify for NDA.

Khandu congratulated the young cadet and said his achievement is a rare feat which is sure to inspire many youths to opt the challenging and prestigious job in the Indian Armed Force.

Arunachal: RKMS at Lumding will start functioning this year