Calling it as a historic day for the state, the Chief Minister in his address thanked Prime Minister Narendra Modi and Union Minister for Law and Justice Ravi Shankar Prasad to have blessed the state with the temple of justice.

Also calling the day as auspicious, Khandu said, “It’s a dream come true to have a High Court building in the state after 18 years since the permanent bench of the Gauhati High Court in Itanagar was inaugurated here in the year 2000 exactly on this very day of 12th August. I am hopeful that justice delivery system will be smoothened and fastracked by the coming up of this high court building.”

The Chief Minister said the new high court building will be built entirely from state’s own resources without depending from the centre. He set the target of two years for its completion. 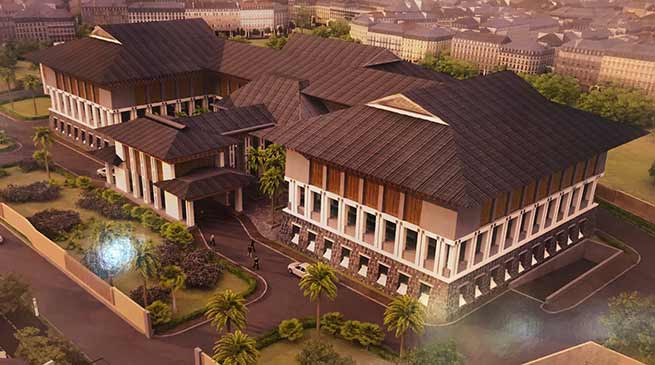 The Chief Minister lauded the service of CJI High Court Guwahati for his advisory role in strengthening the justice delivery mechanism in the state with the creation of new courts and manpower in the last two years.

He said the performance graph of the government advocates in the last two years has also been rising with the support from advocate general of the state and from his personal intervention.

“For development to pick up pace, the state needs to have efficient justice delivery system and law and order in place,” said the Chief Minister and added that since last two years there has been remarkable improvement in law and order in the state. He also said bandh culture which affected the state earlier have almost come to halt.

Further informing on other legal initiatives in the state, the CM said the district legal service authority created in 17 districts are giving their best performance conducting lok adalat in regular period of time and disposing minor cases locally. About 4000 cases have been disposed through lok adalat, informed the Chief Minister.

On a memorandum submitted by Arunachal bar association, the Chief Minister assured that the demand for a Separate and Independent High Court in Arunachal will be taken up on high priority with the centre.

Earlier speaking on the occasion, Deputy Chief Minister conveyed the message of Union Law Minister Ravi Shankar Prasad who assured that the centre will provide full support to the state government in the matters of law and justice.