The cracks has been developed on a portion of Trans Arunachal Highway (TAH) near hoj, due to which the district administration has restricted the traffic movement in through this road.

Executive Engineer Incharge Naharlagun Highway Division Tana Tacho Tara when contacted confirmed that a portion of road just near Hoj developed crack and may collapse/sink due  to heavy rain and landslide. A team of officer with machine will visit the crack side tomorrow early morning to assess the ground situation and further action.

The Papum Pare district administration have restricted the vehicular movement on NH-713 and 713 (A) of Trans Arunachal Highway (TAH)   ( between  Papu-Yupia-Hoj-Potin and Yupia-Doimukh-Sagalee-Leporiang-Pakke Kessang-Seppa) of which an order issued by Deputy Commissioner Dr. Joram Beda on June 29.

The order said that due to onset of monsoon there is apprehension of landslide or flood at various areas of Papum Pare district and the both route are vulnerable and the order/direction have been issued  so that the vehicular movement are restricted on using the said road to avoid loss of lives and property.

Doimukh Police Station OC Padi Payeng while informed  Arunachal24  that information have been given to the counterpart at Yazali and Sagalee Police Station respectively for restriction of the vehicular movement from that side and we are making precautionary measure. 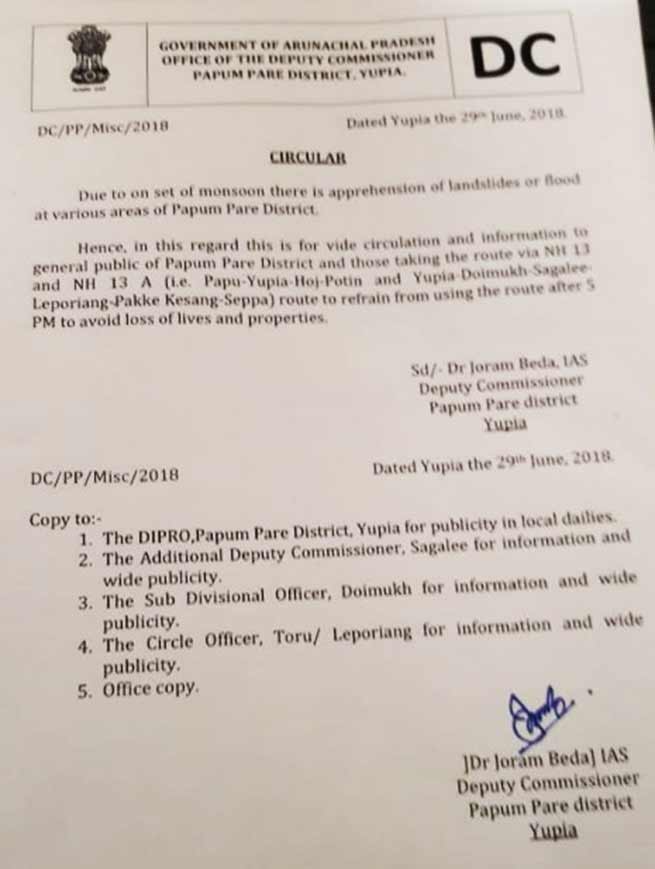