Minister Land Management, Environment & Forest and  the chairperson of the  Joint High Power Committee on Permanent Resident Certificate (PRC) issue for Non APST and others Nabam Rebia today appeal one and all stake holder to shoulder responsibility for the welfare of people and state. he also appeal leaders of political party to attend the meeting.

Addressing the 3rd sitting of the Joint High Power Committee (JHPC) here at state guest house today Rebia said that we have to deliver our good suggestion and view in the interest of the welfare of all tribes and communities of state without hurting anyone sentiment. We have to visit Vijayanagar, Tezu, Changlang alongwith all committee members to get the views, suggestion and opinion of cross section of society. We shall be sit until a concern decision followed by final and comprehensive report and recommendation is submitted to the court of law and state government.

While talking to media Rebia said that since the term of the JHPC have been expired and we shall move for further extension which we are expected to be cleared. He said that we have a good discussion today but felt to understand that many members specially from different political party leader do not turned up. He urge upon all to take part as it is a matter of great concern for all those non APST who are residing in state. The discussion is of PRC but not ST which should be very clear to all. 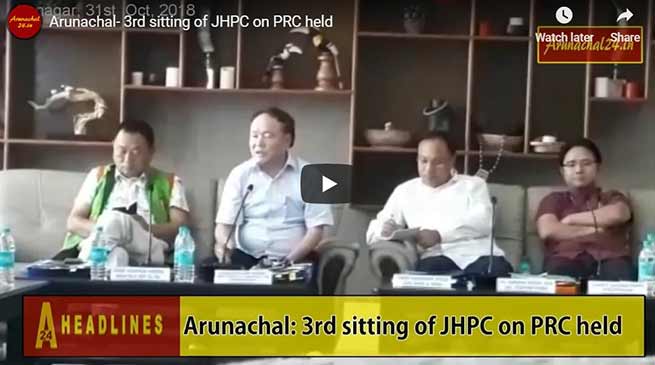 A memorandum have also been submitted by Mikir welfare society  (MWS) with regard to their claim for demand of PRC which they claim to have received earlier.  They claim to be settled since undivided Subansiri district and the matter was also discussed in the meeting.

Arunachal (East) MP Ninong Ering interacting the media said that PRC issue was discussed but not for citizenship,  jobs, banking loans. Students union have objected by saying that the indigenous should only get the PRC or Non APST shall posses ILP. Today meeting was very positive and members have places their views and opinion.

He said that there was a suggestion of Temporary Resident Certificate (TRC) but it was also objected as all the authority during recruitment process by Army and Paramilitary forces do not accept.

All Arunachal Pradesh Students Union (AAPSU) President Hawa Bagang while talking to media said that  there was no solution today and we are still making proper research in the matter and discussed length and breadth, we have demanded for preparation of law in the matter for a solution of PRC issue, we have no objection of claim made by anyone but without any interference of our right and we shall not compromise in curtailment of the rights of indigenous people.

Check Also
Close
LATEST POST
Arunachal: I can feel the pain of people who are travelling through JK TAH- Bamang Felix
October 28, 2020

Arunachal: Covid-19 death toll reaches 36 after a prisoner died due to corona infection on Tuesday
October 27, 2020