CHENNAI: Violence erupted in Tamil Nadu’s Kallakurichi district on Sunday after a 17-year-old girl studying in a private residential school at Kaniyamoor near Chinna Salem died, allegedly by suicide. The girl was suspected to have ended her life by jumping to the ground from the top floor.

According to the reports, the agitated protesters entered the school premises where the girl reportedly died vandalised the property and several school buses set on fire. Chief minister MK Stalin issued a statement in the wake of the violence and appealed for peace.

Meanwhile, C Sylendra Babu, TN DGP on Kallakurichi violence, said that the girl has died of natural causes. “School girl died of natural causes, we registered case. Parents approached HC for another post-mortem. Small group of people came to protest at school, we made arrangements but they collected larger number of people,” he said. 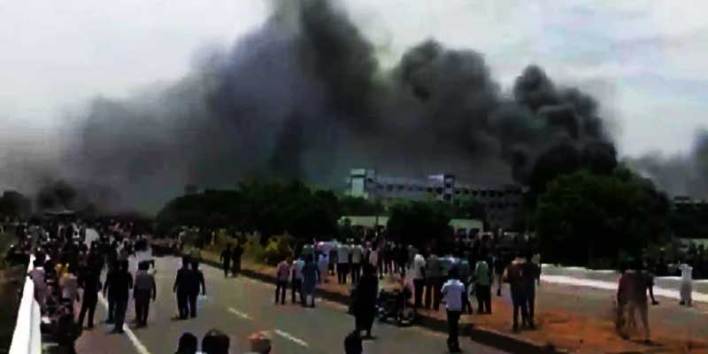 According to the autopsy report, “the girl would appear to have died due to hemorrhage and shock due to multiple injuries.

Violent protesters barged into a Tamil Nadu school on Sunday while demanding justice over the death of a girl student.

Tamil Nadu Chief Minister MK Stalin urged the protesters to maintain peace and assured of severe punishment for those responsible for the death of the student. In a series of tweets, he wrote, “Violence worries me. Accused will be punished when the police probe over the school girl’s death ends. I have asked the DGP and the Home Secretary to travel to Kallakurichi. I request people to maintain peace.”