State BJP President Tapir Gao on Monday alongwith party leaders of Capital district unit  visited the  recent flash flood and landslide hit Modirijo and Donyi Polo Vidya Bhawan Colony and discussed with the family members and relatives of the victims and distributed cash relief from the party side.

The relief distribution programme was organised by the capital district unit under the leadership of its president Tarh Soping after a contribution drive was carried out on September 16 last at Arunachal Pradesh Legislative Assembly campus in a programme of ‘Atal Kavyanjali’.

Gao while addressing the local people and victims family members said that we cannot challenge the nature but we should opt for preventive measures while constructing the dwelling  houses.

Dwelling are constructed only once which should permanent in nature, should be a defensive and durable and safe guard the family at all occasion like winter and summer. But it have been observed that many houses have constructed without following any safety measures  and have to face the nature fury year after year, he added . 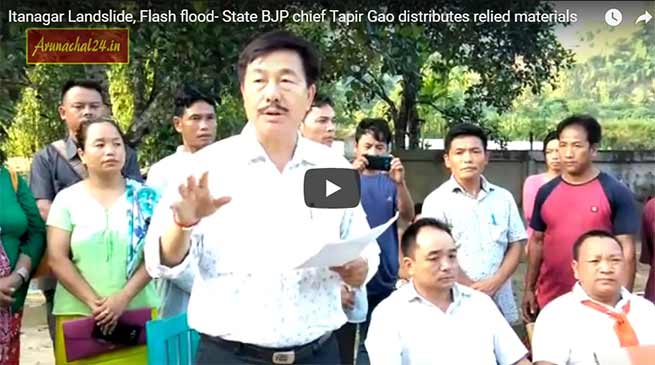 He said that to protect ourselves we have to think ourselves first, government is always there and the state government will help its people for its safety and security but the people need to shoulder their responsibility.

Gao assured his party support and ask Tarh Soping to process the case of granting ex-gratia more than the normal case and will discuss with the Chief Minister Pema Khandu as he arrives capital soon.

Mohila President, Yuva Morcha President and other rank and file of the party were also present on the occasion.