Miscreants tried to loot the State Bank of India in Ganga and vandalised the a ATM of Axis bank in Bank Tinali.

The SBI Ganga branch have been in target of miscreants as such incident take place previously also where miscreants entered through window and break open the several almirah and vandalised ATM kept in bank for public convenient and cash transaction,  but could not able to take any hard cash from the bank.

However other officials of the Branch said that these incident could be possible at any place if there are lack of security guard round the clock.

One senior officer of the Ganga Branch said that the miscreant entered the bank through window and tried to vandalised the place of cash box and vaults but could not succeeded.

The miscreants then tried to take away an almirah which they think of  having cash in it and cut the chain link lock of the collapsible gate of the backside of the branch which open in the Akashdeep shopping complex side. They also  damaged three locks and chain of the gate and tried to take away the almirah but could not able to carry through the steps from the 3rd floor of the building.  They  left the almirah and completely vandalised and find that the almirah was full of files and documents of the bank and they left it and went away. 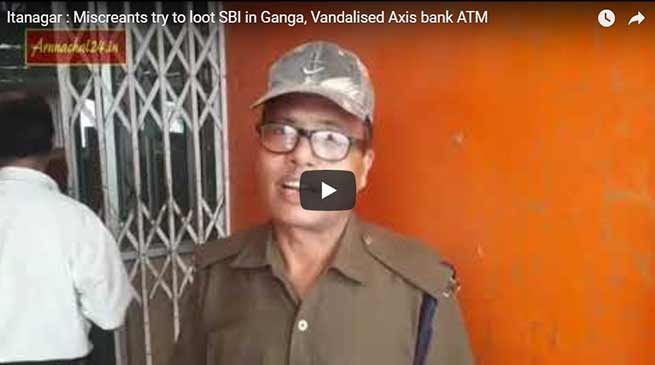 The officials informed that no cash have been take away and files and documents of almirah are thrown on the steps. The matter have been informed to the police and due to which the bank have been close down for having proper investigation.

Axis Bank Senior Manager G Kaphungargpou inform that the bank having a total five ATM in capital complex attached with two branch at Itanagar and Naharlaugn. The ATM attached with Itanagar branch located at Bank Tinali near Hema Hospital have been vandalised by the miscreants in the night of Saturday last.

He said that the miscreants have vandalised the ATM and totally damaged, they have been able to get cash only from the rejection box but no cash have been take away from the cash box compartment present in the ATM machine.

Since the ATM are being maintained by a private agency who have been informed accordingly and they will file FIR to police in this regard. He added.

When contacted City SP M Harsha Vardhan said that an incident of attempted burglary took place in the SBI Branch in Ganga. We have registered a case u/s 457,380,511 IPC at Itanagar PS. Miscreants broke in through a window at the back but could not make away with anything valuable. The almirah was containing files and documents. We are suspecting involvement of two persons. SP said.

We have discussed with bank authorities also about lake security arrangements on their part and asked them to strengthen the security of their branch.

With regard of vandalising of  Axis bank ATM and other no complaint received yet but we are making enquiries on our own. Both the incident took place at around  4. am in the morning.

If any such incident happened the officials or anyone should immediately need to inform to the police. however investigation is being made to create awareness on strengthening of security in the bank and financial institution with surveillance system and other gadget. SP added.