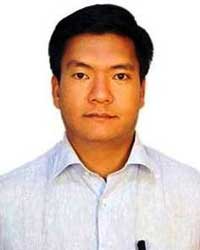 Chief Minister Pema Khandu has welcomed the historic and path breaking decision of Prime Minister Narendra Modi to Scrap the currency notes of Rs.500 and Rs.1000 denominations from the midnight of 08th November, 2016.

In his congratulatory letter to the Prime Minister today, Khandu said that this revolutionary measure of his will have far reaching impact on the fight of the nation against evils of corruption, black money, counterfeit notes and terrorism.

“The people of Arunachal Pradesh whole heartedly welcome this decision and we are committed to support this effort” his letter added. Khandu further informed that he had issued clear instructions on the steps mentioned therein, so that minimum inconvenience is caused to the common public.

“I shall personally monitor to ensure smooth transition towards a Swachh Bharat in the truest sense” he assured the Prime Minister.

Meanwhile, Khandu has appealed the citizens of Arunachal to not to panic on the landmark decision of Prime Minister. He said that enough provisions and time have been given to deposit or exchange the old currency notes of Rs. 500 and Rs. 1000 denominations and every possible measures are being taken to ease the public inconvenience. “The bold and historic decision taken by Government of India under the dynamic leadership of Prime Minister Narendra Modi is sure to have positive prospects and outcome in the days to come” CM asserted while seeking every citizen’s cooperation.