The 5-day youth programme is being organised to celebrate the 150th birth anniversary of Sister Nivedita. About 300 students from different colleges and universities across the state are participating in the ‘mahashivir’. 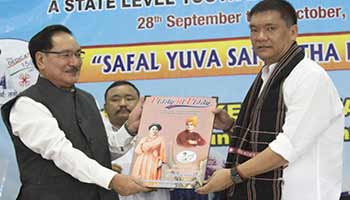 The Chief Minister in his speech appreciated the contribution of Vivekandanda Kendra in the field of education particularly made during those days when the state suffered from poor road communication.

In his message to the youths, the Chief Minister advised them to be responsible as the adolescence phase presents a critical period. A positive interventions can have benefitting effect but negative one can destroy the life of a child. He, therefore advised the children to be attentive to what elders have to say. He emphasised on having control over mind as lack of it may make them fall prey to all sorts of allurement.

Informing the the participants that the state government is giving priority to youth employment and skilling, the Chief Minister said, “We aim to train 9000 youth in the coming financial year under Pradhan Mantri Kaushal Vikas Yojana with minimum 70% employment guarantee.

In order to encourage local entrepreneurship, we have launched Pt. Deen Dayal Upadhayaya Swavalamban Yojana. A back ended 30% Capital investment subsidy is being provided for small and medium enterprises on loans ranging from Rs 10 lakh to Rs 1 crores excluding land and building.”

Further he informed the youths about the state government’s initiative on education sector. He emphasised on bringing quality education and not merely increasing the literacy rate. He informed that ‘no detention policy’ has been abolished and board exam system has been reintroduced in all schools in the state. He called the ‘no detention policy’ as an failure that has crippled a generation in education.

The Chief Minister said today’s many of the youths are literate but not educated in real sense. They are growing impatient, and losing the ability to analyse. He reasoned it to the failure in the education system where many are taught to read but not able to make them distinguish what’s worth reading. Due to this the youths are failing to understand the value and ethics of life, he said.

The Chief Minister also emphasized on unity among all tribes of Arunachal and said unity is essential if the state has to march ahead and called upon the youths to respect cultural differences. He advised them never to forget their cultural roots.