At least two person was killed in a road accident while a scorpio vehicle skeet in around 150 fit deep gorge  here NH 415 in between  Hollongi to Itangar on last night.

The body had been identified as Techi Yanu daughter of   Techi Kapa  and Techi Mema  IMC Councillor , Techi Rebia son of Techi Gubin , Director of Housing, Itanagar, and Injured person has been identified as Tadar  Nayar, Tenzing  chukla Tadar and Kipa Mariam .

SDPO Itanagar Dekio Gumja informed that five person were in board  the vehicle (Scorpio) bearing registration no AR -01K 2828 met with an fettle accident and  fell in deep gorge in between Hollongi to Itanagar road at around 7.20 pm on Sunday. two died and three critically injured, late Yanu who was driving the car had been brought that RK Misson hospital,  Itanagar, while Rebia succumbed to his  injury at Hospital. 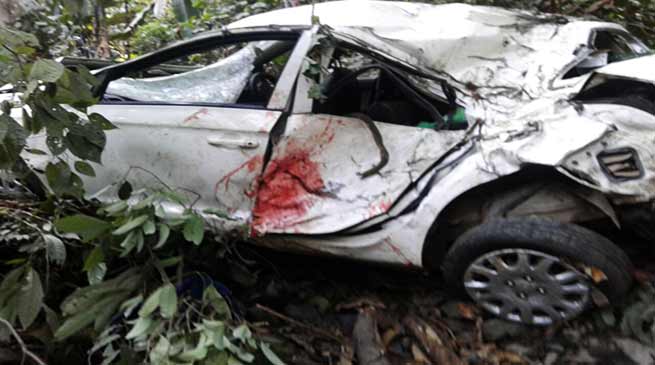 after conducting formality the body has been handed over to the family members.

In Bhalukpung one I20 vehicle, which was on its way from seppa to Monipur met with an accident at Sessa near durga Mandir  on this morning, where three person sustained  injured,  while one 7 years old girl Lamngaineng Baite of Samuel Baite Village , Urangpal  of Imphal   succumb to injury , who was die on way to Hospital . Late Baite was student of class one Imaging Grec  academy Seppa.

Bhalukhpung OC PS D. Bagra Said that a case has been registered , case no 19/17 U/S – 279 /304(A) post mortem of the body had been done and injured has been shifted to Hop hospital Bhalukpung .