A huge fire gutted down 15 units of Kutcha house today near minister bungalow at Niti Vihar in Itanagar. Upon hearing the news, the Capital Complex DC Prince Dhawan rushed to the incident site and as an immediate measure, nearby Bunglow no.9 has been made as temporary relief camp and the victims were shifted there. The District Administration distributed relief materials like blankets, utensils and food items to the fire victims. The DDMO Moromi Sonam informed that the cause of the fire could not be ascertained as of now.

The Itanagar police sources said that a total 16 OBT houses have been turned ashes, no causality have been reported , two fire tender were pressed into services which douse the fire in spreading in the locality which took around 1 hour of hectic effort.

The accident occurred at around 6.15 PM which completely gutted 16 OBT and  huge loss of property have been reported the sources said.

Medical team of Itafort dispensary led by Incharge Dr. Kabak Tamar rushed to the spot and give medical assistance to few injured persons during the rescue operation in the incident. 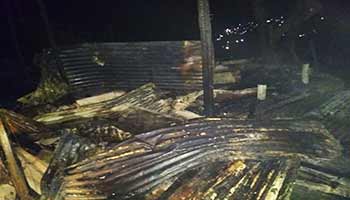 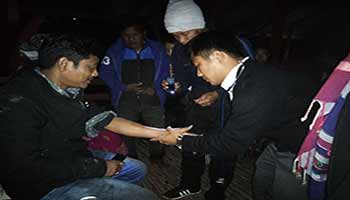 Meanwhile IMC Councillor Donik Tayu have appeal the state government and district administration to immediately provide immediate relief for rehabilitation of the family members as they have lost everything they have and facing acute problem in cold winter without household materials and clothing’s.

The eyewitness said that five cylinder burst and a property worth 1 crore have been lost in the incident.

At least 70 persons become homeless in the fire incident who are currently affected family are shifted to Bunglow No-9 for immediate rehabilitation.