The young innovator of Arunachal Pradesh, Tadar Anang given away warm welcome on his arrival to his home state at Naharlaugn Railway station this morning.

The well-wishers, family members and his friend were eagerly waiting at the Railway station for arrival of Anang who become a innovator scientist of state who returned to his home state with lots of memories after attending international conference held at South Africa.

While sharing his memories Tadar Anang said that  It’s a privilege to attend the 3rd BRICS Young Scientist Forum at Durban South Africa representing my state and country. I was among the 10th participants from over the BRICS country. Competing against the other innovators from Brazil, Russia, Indi,  China and South Africa.  It was a really tough competition for me to complete against those already established companies and other multi-million dollar companies. Each and every participants older and more experience than me. Indeed I was the youngest amongst every delegates of the BRICS Young Scientist Forum. But despite all that I would like to tell that I had made impression in each and everyone’s heart. And also won the award for the most “promising Young innovator”.  Like the Chinese adjudicator said “age is just a number, no one can  refrain you from doing innovation if your heart and mind are set on it, which he said after hearing my presentation and seeing my energy and my Innovations. There were many applauses from other delegates and representatives regarding my presentation and Innovations. Indeed it was a matter of pride for me to take the name of my state and country at the presence of all brilliant minds of the BRICS country. 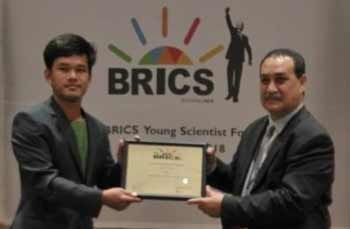 But that’s not all, winning and losing is just a part of the event, more then that is what we learn from the experience. After attending the seminars, conference etc from various countries with their various cultures and knowledge, problems they face, ones realized there are more to be learned and more to be done. It is also a fact that learning process never end.

Representing our state  and country in international platform and inspiring other countries of our nation and kind is something  worth more then any Prize.

He also extended his heartiest thanks Minister Bamang Felix, Itanagar Science curator  Dr. Vivek Kumar, media person  Manoj Singh, family members and all the for their help, also my thanks to each and every individual who supported him me and make this trip a successful one.

While elaborating his journey Anang said that It’s really good to be back home.

The journey began from Naharlagun on June 22 and stayed in Delhi for a meeting on 23 and Departed to Durban at 23 evening. Registration on 24 June while event started from 25 to 29 June.

After all the activities he started his back journey from Durban on 30 June. And reached on 6th June due to bad weather.

In regards to the certificate Tadar Anang said that all the winners received the same certificate with a cash prize. He said that Brazil was the 1st, South Africa stand at 2nd while China remain at 3rd and the special and promising award was received by him with a certificate and a cash prize of 1000 US dollar..

Itanagar: Domestic help died after falling down from staircase